GRACE TO COVER ALL MY SINS

When we look closely at the lives of great Bible characters like Abraham, Moses, David, prophets Isaiah and Elijah and Noah in the Old Testament; along with Peter and Paul in the New Testament, one will observe after a cursory look, that they were not saints; they had their own shortcomings, yet they were used by God. This leads us to further question whether God who is All-Knowing, All-Mighty, holy, pure and good would use imperfect people to transmit messages to those who do not match up to God’s standards.

First, we must realise that God’s methods are very different from ours. “For my thoughts are not your thoughts, neither are your ways my ways,” declares the Lord. (Isaiah 55:8) God does not see things the way we do, nor does he judge us the way we judge our fellow men. Humanity is prone to condemning others and not discerning the good in God’s creation. We are quick to discard someone as useless rather than seek to bring out the hidden qualities in that person. In every human being there is a lot of good. After God made man ‘in his own image’ he declared him as good. “God saw all that he had made, and it was very good.” (Genesis 1:31) If therefore he has an inclination to sin, it only suppresses but does not totally eradicate the intrinsic goodness in him.

In sum, in God’s hands the imperfect becomes perfect, just as the weak becomes strong, the poor rich, the unfulfilled becomes fulfilled, the incomplete changes to the complete, the foolish seeks wisdom, the corruptible takes on an incorruptible nature and what was hitherto impossible turns possible.

Our judgement is limited. We are always judging a book by its cover. If in a seed there is not only a tree but a forest, imagine what God sees in us when we offer ourselves to his service or when we make ourselves available for his use? God is in the business of qualifying the unqualified in order to accomplish his purpose. He does not require someone with a string of degrees or experience for that matter. All he requires is our willingness and our availability to do his will.

When God desired to send his Son into the world to save humanity he looked for a young maiden to carry it. When the angel of God told the Virgin Mary that she had found favour with God; that she would conceive and give birth to a child she responded: “May it be to me as you have said.” (Luke 1:38) Actually she was saying ‘just as you wish.’

You may be unsuitable material at the onset but with a touch of God’s hand, a transformation can take place that can turn your world around. Who would have thought that Saul could have been used by our Lord Jesus to spread the Gospel after he had championed the persecution course against Christians? Only God could. After his conversion, Christians did not trust his switchover “I have heard many reports about this man and all the harm he has dome to your saints in Jerusalem. And he has come here with authority from the chief priests to arrest all who call on your name.” (Acts 9:13-14) Ananias was reassured when the Lord told him “Go! This man is my chosen instrument to carry my name before the Gentiles and their kings and before the people of Israel.” (Acts 9:15)

When God called Abraham, he was an unbeliever, a pagan. God told him in very clear terms: “Leave your country, your people and your father’s house and go to the land I will show you. I will make you into a great nation and I will bless you; I will make your name great, and you will be a blessing. (Genesis 12:1-2) Abraham packed his bags and left. God used him mightily!

If God should mark our transgressions who would stand? God is ready to give us ‘beauty for ashes.’ In our own eyes, we may look unworthy to be called by God and assigned a task. In God’s eyes, he looks beyond our faults and shortcomings. He administers Grace each time he deals with us humans because of his love for his creation that we are.

His graciousness covers all our sins. Only by GRACE can we enter into his presence - not because of any good work of our own.Bask in his grace today! 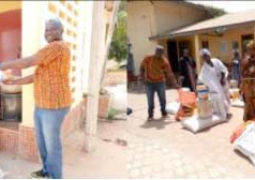