The Gambia Press Union (GPU) branch in the through the Press Union in The Gambia yesterday rendered some humanitarian assistance to the family of missing journalist Chief Ebrima Manneh.

The donation, amounting to D39,382.50, (Thirty Nine Thousand, Three Hundred and Eighty Two Dalasis Firty Bututs), was among others, geared towards helping the family of Chief Manneh set up a small-scale business for their self sustenance.

Speaking at the presentation ceremony held at the GPU Secretariat in Bakau, the Executive Director of the Gambia Press Union, Ahmed Alota, explained that Manneh went missing on 6th July 2006 and that, since then, his family has been getting some support from the GPU-US branch.

The money, he said, was to assists the family to set up a small business for their self sustenance.

Demba Jawo, former President of the Gambia Press Union, expressed gratitude to the GPU-US branch for the timely gesture.

“This is not the first time they have been doing this,” Jawo said, calling on other organizations abroad as well as local ones to emulate the donors.

He also commended the Gambia Press Union for being with the family of Chief Ebrima Manneh over the past five years.

“It is an unfortunate situation in The Gambia for somebody to disappear into thin air like that,” Jawo opined, while expressing optimism that Chief Manneh is alive and is somewhere else.

He urged the family to bear the sad situation, saying: “We hope things will turn around within a short period of time.”

Speaking shortly before the handing-over, Sarjo Manneh, father of Chief Manneh, commended the donors for the support rendered to him and his family.

“Nothing can replace a son, especially what he stands for,” said old Sarjo Manneh, adding that thanks to the support from the GPU, he has not turned to begging in the streets.

According to him, he has made several efforts to trace his son across the length and breadth of the country, but he is yet to succeed.

“I went to the vice president and head of the NIA to enquire about my son, but to no avail. Sometimes, when I think about my son, I shed tears,” he added.

He expressed gratitude on behalf of his family to the donors for their humanitarian support towards  them. “We cannot pay you, but surely God will reward all of you,” he stated.

Haddija Jawara, treasurer of the Gambia Press Union, also spoke at the handing over ceremony.

It would be recalled that journalist Chief Ebrima Manneh has not been seen for over five years now, since 7th July 2006 when he reportedly went missing.

It should also be noted that the Media Foundation for West Africa (MFWA) recently filed a lawsuit against the government of The Gambia at the Community Court of Justice of the Economic Community of West African States (ECOWAS) on behalf of Ebrima Chief Manneh. The court in a judgment stated that Chief Manneh be released immediately, and be paid US$ 100, 000 in compensation by the Gambian state.

However, the government denied knowing the whereabouts of Chief Ebrima Manneh. 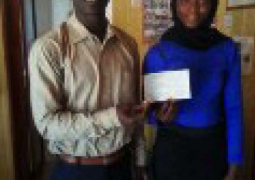