Nfamara Jammeh, a senior officer at the Ministry of Trade in Banjul, has said the government recognised the pivotal role the poultry sector contributes to the development of commerce and the economy of The Gambia.

Mr Jammeh was speaking at the opening of a daylong orientation forum for EMPAS out-grower scheme participants aspiring to be entrepreneurs at the company’s Farato on Monday.

The long-term objective of developing The Gambia’s poultry sector is in line with the President’s vision of food self-sufficiency by 2016, he said.

The Gambia remains a predominantly agricultural country, as far as employment is concerned, and a service economy in terms of contribution to GDP, he added.

However, he said, poultry farming plays a major role in the livelihood of most farmers and vulnerable women and youths, especially in the rural areas.

The sub-sector also serves as an income-generating sector with a huge potential of creating jobs and food, he added.

“It is no doubt that the commercial poultry sub sector is virtually dominated by imported poultry products throughout the country, and interventions are to be directed towards enhancing the lucrative venture of the local livestock production.”

The sector also made a significant contribution to the commercial sector in meeting the rapidly growing demand for poultry products, especially during the tourist season, he added.

“It is evident that there is a huge gap in the local poultry production that needs to be filled and would require an increase in production, labour, review of government policies and protective measures to give priority to the local poultry industry,” Mr Jammeh further stated.

Principally, the government’s support to any level of investment within the economy has been well defined in national documents, such as the national MSME policy and action plan, the National Investment Act, the National Entrepreneurship strategy, GIEPA Bill 2014, and the trade policy review document for The Gambia.

Given that poultry keeping is one of the most popular livestock enterprises in Africa, poultry products do not only serve as an important income-generating activity, but also contribute to addressing the food crisis being experienced by most developing countries, he went on.

Poultry also serves as a major source of animal protein and is being used in many diets, he continued, adding that the sector provides employment directly to individuals in production and marketing, and indirectly through linkages with suppliers of such inputs as day-old chicks, feeds and veterinary services.

He also stated that investment in the poultry industry would have significant multiplier effects through both their backyard and forward linkages along the value chains.

Therefore, he continued, the combined effects of employment gains and food security through improved agro-industry competitiveness could be an important strategy for reducing poverty in the country, as has been the case in other developing countries.

He added that considering the potential contribution of a vibrant poultry-industry sector to pro-poor growth, supporting such an investment in production, marketing, management and packaging would certainly improve the livelihood of the community and beyond.

Mr Jammeh spoke of the country’s drive is to ensure a solid and sustainable industrial development process, particularly in poultry, which is under-utilised in the country.

Mr Jammeh implored the company’s management to look into the future with greater optimism, to ensure a sustainable path as the company prepares to execute its business plan in the years ahead. 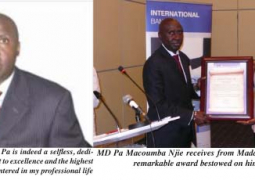