Is your heart right with God? Curiously, God would like to know. To accomplish this He puts us to the test. Have you been tested by God yet? Certainly! You may be unaware it is a test and would find yourself alone in the ring sometimes sweating it out. That was the case with His servant Job who was rudely tested.

Job was a righteous and wealthy man. “There was no one like him; he is blameless and upright, a man who fears God and shuns evil.” (Job 1:8) Satan thought differently however. “Does Job fear God for nothing?” (Job 1:9) By that he meant that God had blessed Job and naturally Job was indebted to Him and therefore would remain loyal, faithful and obedient. If there was no protection from God Job would have behaved otherwise, he argued. God allowed Satan to test Job without making any attempt on his life. “… everything he has is in your hands, but on the man himself do not lay a finger.” (Job 1:12)

Satan was given a ‘carte blanche’ and he afflicted Job severely. He wiped out his children and destroyed all of his possessions. Overnight Job lost all that he ever had; but that did not make him curse God. He stayed steadfast.

Satan was not satisfied with the results so he sought permission, which he obtained, to “strike his flesh and bones.” (Job 2:4) Again, Satan did not get the desired results. Amidst all his trials, Job declared; “But He knows the way that I take; when he has tested me, I will come forth as gold.” (Job 23:10) Could this have been me? I wonder. Would you have been able to speak in such terms?

God had confidence in Job’s character. He never doubted him. In fact, it was He who suggested to Satan to undertake the exercise. “Have you considered my servant Job?” (Job 1:8) God was so pleased with His servant that He challenged Satan to put him to the test. It is not Job who is boasting about himself. It is God who is parading Job’s qualities. Can God boast of you and me in this regard? Would He stick His neck out for us both?

God blesses integrity. Through James’ pen God says: “Blessed is the man who thrives under trial, because when he has stood the test, he will receive the crown of life that God has promised to those who love him.” (James 1:12) God will test us to see what mettle we are made up of; whether we are weak or strong, whether we pay only lip service to our beliefs? God wants to be able to trust us totally, whatever the circumstances. It is important for Him to find out our limits and how far we can bend and not break.

Job did so well to Satan’s shame that he was rewarded beyond his former glory. “The Lord blessed the latter part of Job’s life more than the first. He had 14,000 sheep, 6,000 camels, 1,000 yoke of oxen and 1,000 donkeys. And he also had seven sons and three daughters. Job lived a hundred and forty years, he saw his children and their children to the fourth generation.” (Job 42:12-16)

God tested Abraham when He told him: “Leave your country, your people and your father’s household and go to the land that I will show you.” (Genesis 12:1) Abraham packed his belongings and left. He was seventy-five when he stepped out in faith on this adventure.  Twenty-five years after this encounter God blessed him with a son in his old-age. Then He put Abraham to the test. “Take your son, your only son, Isaac, whom you love, and go the region of Moriah. Sacrifice him there as a burnt offering on one of the mountains I will tell you about.” (Genesis 22:2)

Abraham left early the next day to carry out God’s request. He did not raise an eyebrow neither when he left his home in Haran in keeping with God’s order, nor when God asked him to kill the only son He had given him. Did Abraham realise he was being tested? Whatever it was he passed the test with flying colours. He never asked God the reason for such a request, he only complied. God never failed him either, for he became the father of many nations as He had promised: “… and all peoples on earth will be blessed through you.”  (Genesis 12:3)

“By faith Abraham, when God tested him, offered Isaac as a sacrifice. He who received the promises was about to sacrifice his one and only son, even though God had said to him. It is through Isaac that your offspring will be reckoned.” (Hebrews 11:17)

Would you like God to test your heart? To do that, you’d have to be in right-standing with Him, certain that you will be approved and not be found wanting. Here’s what David wrote in one of his psalms; “Test me, O Lord, and try me, examine my heart and my mind; for your love is ever before me and I walk continually in your truth.” (Psalm 26:2) David had a sober relationship with God and therefore he could speak in these terms. Such a relationship can be cultivated: “Search me, O God and know my heart; test me and know my anxious thoughts. See if there is any offensive way in me, and lead me in the way everlasting.” (Psalm 139:23)

When trials come our way, God is at work refining us for service. Gold and silver are purified in intense heat, and all the dross, (the filth) that should be discarded floats to the surface. It isn’t any different for Christians. God wants us pure so He applies some heat to get rid of anything that will get in the way; anything that should put us at variance with His word. God will use such tests and trials therefore to obtain the real heart condition necessary for the assignments He has scheduled for us. Are you ready for this?

Far be it that we should be like the seed in the parable of the sower (told by our Lord Jesus) that fell on rocky soil. “Those on the rock are the ones who receive the word with joy when they hear it, but they have no root. They believe for a while, but in the time of testing they fall away.” (Luke 8:13) 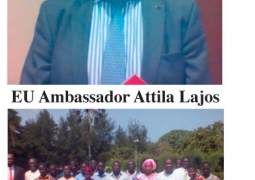