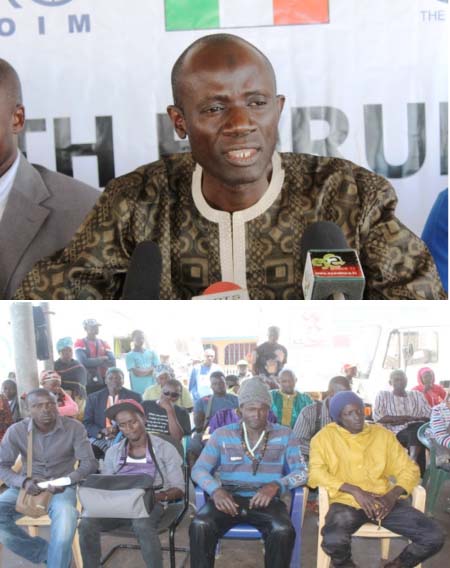 Alieu K Jammeh, minister of Youth and Sports, has said the role of youths in the development of The Gambia is vital, and that was why the government is always committed to their development.

“The government of The Gambia is fulfilling its obligation towards ensuring that the young people of this country are put on the right footing, guided properly and nurtured to contribute meaningfully to their individual and national development.”

Minister Jammeh was speaking at the presentation of fishing materials to voluntary ‘back-way’ returnees from Niger, Libya and other North African countries.

In addition, a mini-truck with D50,000 was handed over to the group embarking on fish marketing and distribution.

The materials were part of a project dubbed ‘Community initiative to curb youth irregular migration’, being implemented by the National Youth Council on behalf of the government.

The six-month project is funded by Italian government and European Union through International Organisation for Migration (IOM).

According to Minister Jammeh, the Gambia government has created “numerous opportunities” for the young people, from education to skills development and other areas.

“This shows our commitment as a government that cares for the well-being of youth,” he said.

“So, there is no need for us youth to begin to think and believe that the greener pastures we continue to think of are available outside the borders of this country.”

The Youth and Sports Minister further said that there is no reason for one to leave “all these opportunities to go and live in hell.

“As young people, who do we think is going to develop this country for us, if all of us emigrate and live behind the elders?”

Jammeh added that the countries to which youths are migrating were not developed in a day; it took them centuries and dedicated efforts to develop.

The minister said The Gambia has a government that “is giving it all restlessly” for the well-being of youths, but still “youths are leaving those opportunities behind to go live in hell”.

Lamin Darboe, executive director of National Youth Council (NYC), expressed optimism that the six months project will be beneficial to the youths, particularly at the local level.

“It is a pilot project, and if successfully implemented, many of this type may follow,” he said.

Landing B. Sanneh, general manager of the National Enterprise Development Initiative (NEDI), said the youths who were given the materials were trained by NEDI in business development skills before they were provided the support.

“These young people now have the knowhow to operate their business, and are very much committed to the success of the project,” he said.

Alagie Amul Nyassi, deputy governor of West Coast Region (WCR), said most of the fishing boats at major fish landing sites in the country such as Tanji are owned by non-Gambians.

“It is time for Gambian youths to see fishing as a viable business opportunity,” he said, adding that contributing to the development of a country does not only mean working for the government.

“You can contribute to the development of the country in any endeavour you may find yourself in,” he said.

Ansumana Jawara, desk officer at IOM Gambia office, said the project was conceived out of the desire by the IOM to encourage migrants stranded in Niger and other countries in North Africa to voluntarily return to their home countries.

“More than 90 per cent of the migrants assisted by IOM said the willingness to improve their living condition by seeking better opportunities is the main reason they decided to migrate,” he said.

The six months project has come to assist them [back-way returnees] to have better opportunities to better their lives in The Gambia, Mr Jawara said. 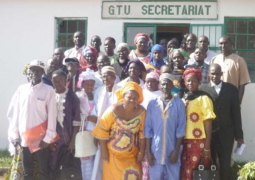