Mr President, latest figures indicate that 12,000 Gambian migrants had arrived in Europe. This calls for alarm though the figure has dropped after longtime dictator’s ouster and your government needs to act and act fast.

Illegal migration is one of the world’s global challenges, especially for African leaders, in which The Gambia is no exception.

Most youths left the country in search of greener pastures whilst some left because of the harsh environment of the past dictatorship regime of Yahya Jammeh. On the contrary, some have also voluntarily returned home with the hope that things will change for the better. The youth also played a vital role during the transition just to see things change for the better.

The EU has expressed interest in working with your government in areas of youth employment which is very welcoming and encouraging.

Mr President, We are appealing to you to put the money given by the EU to good use and in the right place.

This money should be used to build more skills centres and upgrade existing ones to good standard where youths can go and learn skills, such as the NYSS and YMCA, and create employment for the youth with good salaries and incentives to keep them in the country.

Recently, we have seen university graduates leaving the country because of lack of employment or very unattractive salaries whilst some don’t border to come back home after their studies abroad.

The minister of youth and sports recently started a nationwide tour which is very relevant at this stage and much is expected when he returns.

The Minister should try and involve the youth into dialogue to discuss their problems and should later come up with a strategic plan of tackling the high rate of unemployment of youth and a solution to this alarming rate of illegal migration of the Gambian youth.

Mr President, the cooperation between The Gambia and China is very timely too as China has been one of those countries that were giving scholarships to students from The Gambia.

We expect your government to explore the area of education and skills acquisition. China is well versed in skills and training, and has exchange programmes for the youth, who could go there to acquire skills in areas like road construction, engineering, health, and IT,  to name but a few. 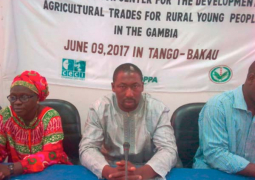