The names we know God by, put him on a pedestal. His attributes fill the Bible. Despite his lofty stature, God makes the first move to reveal himself to us, his creation. After communicating through the prophets, he then sent us his Son in the person of our Lord Jesus Christ who instructed us to call God our Father. “This, then, is how you should pray: ‘Our Father in heaven, hallowed be your name.” (Matthew 6:9)

God wants to nurture a special relationship with us as a father would with his children. What qualifies us as children? The Bible teaches that “all who received him (Jesus, his Son), to those who believed in his name, he gave the right to become children of God – children born not of natural descent, nor of human decision or a husband’s will, but born of God.” (John 1:12) He further entitles us to the status of a friend. What a privilege!

God revealed to Abraham, who desired to be a father that he would be given not just a son but that he would be the father of many nations. To illustrate this, he showed him the stars. “Look up at the heavens and count the stars – if indeed you can count them. So shall your offspring be.” (Genesis 15:5) Because Abraham believed God, it was counted to him as righteousness. “And the scripture was fulfilled that says, Abraham believed God, and it was credited to him as righteousness,” and he was called God’s friend.” (James 2:23)

The thought of God dealing with us as friends may be unsettling because we may think ourselves unworthy. Nevertheless, God comes down to our level and treats us as friends.

Prior to the destruction of Sodom and Gomorrah, God decided to acquaint Abraham with his plans as a sign of the special relationship he had knit with him. “Shall I hide from Abraham what I am about to do?” (Genesis 18:17) This privilege prompted Abraham to even negotiate with God for a stay of action. Unfortunately, not as much as ten righteous people could be found in Sodom and Gomorrah, so it rained sulphur on the twin cities.

Twice Moses had a personal encounter with God on Mount Sinai where he was summoned to receive the Ten Commandments. This very special relationship with God qualified him to be called a friend of God. And the Bible narrates; “The Lord would speak to Moses face to face, as a man speaks with his friend.” (Exodus 33:11) God saw Moses as a friend in view of the several encounters warranted by his assignment. Mark you, neither Abraham nor Moses had to do anything extraordinary to earn their status as friends. It was just a case of the God making such overtures to his servants.

What a friend we have in Jesus?

Our Lord Jesus admonishing his disciples told them; “You are my friends if you do what I command.” (John 15:14) That word is being directed at us today. Our entitlement for the status of friendship with the Lord depends greatly on the degree of our faithfulness in carrying out his instructions.

The Pharisees and Sadducees mocked him for spending time with the down-trodden, the social outcasts and the underprivileged and labelled him; “A friend of republicans and sinners.” (Matthew 11:19) Indeed, our Lord Jesus is a friend of sinners having come to save the world from sin. The Bible says of him. “Greater love has no one than this, that he lay down his life for his friends.” (John 15:13)

The hymn writer renders it thus: “What a friend we have in Jesus all our sins and griefs to bear! Can we find a friend so faithful, who will all our sorrows share?” Yes, he provides refuge; he shields us in his arms in our weak and heavy-laden status when we are cumbered with a load of care. When we go through trials and temptations, in the midst of trouble, we should take it to the Lord in prayer. We are no strangers to him, he knows us through and through.

Our Lord Jesus concludes; “I no longer call you servants, because a servant does not know his master’s business. Instead I have called you friends, for everything I learned from my Father I have made known to you.” (John 15:15)

Would you consider yourself God’s friend? Then lay your head on his bosom and enjoy his friendship like John the Apostle did. 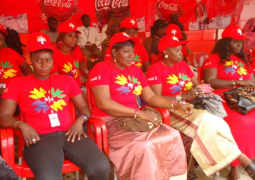