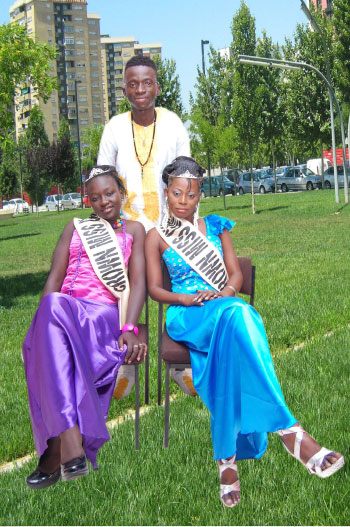 The beauty competition held at Brikama Jokor was attended by hundreds of people in Brikama to witness the crown on stage.

This goes with a live entertainment by musicians starting from 10pm until the following morning.

Speaking to journalists shortly after the two declared winners of the competition, Christopher Mendy, aka CEO of GMB Promotions Company, thanked all those who attended the event, particularly the contestants of the event.

“GMB Promotions has been doing a lot but still we are working for the recommendation so that people will know what we are doing,” he said.

He said GMB Promotions is a fully registered company to contribute the little towards national development.

“As you have witnessed ‘The two sides of Beauty’, it is the first of its kind in the country,” he added.

GMB Promotions boss told journalists he is not organizing this event to make money but is just like a free promotion for the young talented ones as well as to promote the hiding talents of youths and also to contribute to the development of the nation.

“We use the GMB Promotions like the Gambia promotions to cover the whole nation,” he said, adding: “GMB Promotions was established in 2010 the day of my birthday; so I said to myself ‘what can I do for my people’, then I decided to come with this idea.”

Miss Aji Fatou Njie, 18, who became the first winner on her platform topic of Leadership, thanked GMB Promotions for coming up with such an important competition, which is one of its kind in the country.

She said she has chosen this topic because some take leadership as something unimportant, which is not the case.

She therefore commended all the contestants for their participation in the competition.

Fatou Sowe, 20, who emerged the second winner on the platform of sexual harassment, said the vice is rampant in the world and it has to be stopped because it is affecting society.

She also thanked GMB Promotions for coming up. with such a good initiative.