The Gambia Maritime Administration (GMA) under the auspices of the Ministry of Works, Construction and Infrastructure on 27 October 2011, organised a one-day forum on resource mobilization for maritime organization, held at the Atlantic Hotel in .

The forum was held to heighten the recognition of resource mobilization towards the sustainability of any given public or private organization including a regulatory maritime entity.

The event was another effort of the GMA to expand and deepen relationship between maritime stakeholders, especially those within the sub-region.

Speaking at the opening ceremony, the minister of Works, construction and Infrastructure, Hon. Njogou L. Bah, said the gathering was important for two reasons. He said: “Firstly, resource mobilization is critical to the sustainability of any institution whether it is a government institution or a private company. Without minimum required financial, human and material resources an institution is bound to fail no matter its lofty ideals and aspirations.

“It is in recognition of the pivotal role of resource mobilization that the maritime Administration Board of Directors with the strong supports of my ministry, is intensifying efforts in this area one of which is the introduction of freight levy on cargo arriving and leaving The Gambia. Such a levy is being charged worldwide including countries within our sub region.’’

The is not introducing anything new, he said, adding that freight levy is stipulated in the GMA Act of 2006.

He pointed out that within the framework of cooperation and understanding, it was decided to bring in the participation of the key stakeholders “rather than government unilaterally imposing the scheme”.

“I must admit that I am encouraged by the level of representation from the shipping companies and the consignees,” he said.

He said further: “After all, it is in the interest of us all that The Gambia maritime administration be sufficiently resourced to enable it carry out her statutory responsibilities regarding safe and secured maritime transport free from maritime pollution.”

Hon. Bah pointed out that the other significance of the event is its regional character.

“Having distinguished fellow Africans to come and share with us the rich experiences of his country in the area of resource mobilization for a maritime organization, is a catalyst towards strengthening regional cooperation and capacity building and now it has become more obvious than before,” he said.

Speaking earlier, GMA Board Chairman Nicholas Blell said that in 2006, government established the GMA, with the responsibility to managing, regulating and coordinating activities in the maritime industry, thereby creating the enabling environment for future development of the sector to ensure safety of navigation and protection of the marine environment.

Mr Blell pointed out that in the short period, since its creation, a lot of grounds have been covered by the administration, which has made it possible through the laudable support of government and the GPA, “the latter providing manpower and financial resources, for which we remain sincerely appreciative”. 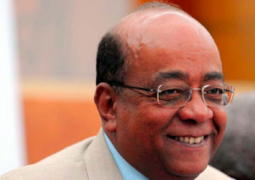 Statement from Mo Ibrahim, Chair of the Mo Ibrahim Foundation, on the outcome of the recent Presidential elections in The Gambia