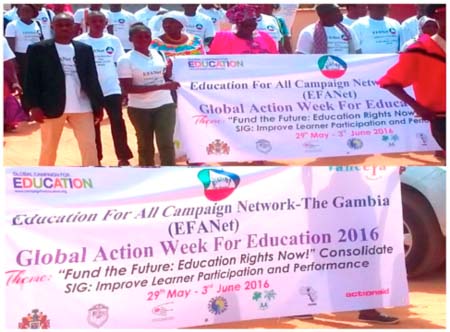 Education for All Campaign Network (EFANet), in collaboration with development partners, commemorated the Global Action Week for Education (GAWE), on Tuesday 31 May 2016 at the Kanifing Municipal Council (KMC) Youth Multipurpose Centre on Jimpex road.

The Global Action Week for Education (GAWE) is commemorated every year to remind world leaders of the promises made in the Dakar Framework for Action in the year 2000 to meet the Education for All Goals.

EFANet in solidarity with the global community is commemorating the GAWE 2016 on the global theme: “Fund the Future, Education Rights Now! Consolidate SIG: Improve Learner Participation and Performance”.

This year’s theme explains the need to intensify the advocacy campaign for increased provision of funding to education, especially for The Gambia.

In this regard, EFANet is set out to conduct various advocacy activities including a media campaign; radio and TV shows, press releases, social media, procession and the highlight events, to advocate the theme on the need for more investment in education.

Speaking on the occasion, the deputy Mayoress of Banjul City Council (BCC), Mrs Awa Sillah, said the global theme for this year ‘Fund the Future, Education Rights Now! emphasises the need to intensify the advocacy campaign for increased provision of funding in education in order to ensure that the right to education of every child is respected, protected and fulfilled.

She said the theme highlights the need for a renewed and compelling financing pathway for achieving equal education opportunities for all.

‘’Education plays a significant role in national development and the achievement of a peaceful and progressive society,” she said. “Support for education around the world is an investment in a safer, healthier and more prosperous future.”

Mrs Sillah also said that the level of advancement of any country, to a great extent, depends on the level of literacy of its people. “As such, the need to continue investing in the provision of quality education for our people cannot be overemphasized,” she stated, adding: “This year’s theme could not have come at a better time.’’

Mrs Sillah also heaped praises on the government for its efforts towards education, especially with the introduction of the School Improvement Grant (SIG) in The Gambia, which she described as a timely response to funding the future and ensuring education rights are observed in The Gambia.

The objective of the SIG is to reduce the burden of school cost by abolishing all school levies in order to create free access to education in The Gambia.

‘I would like to commend the Government of The Gambia for such a noble initiative as the SIG has not only lifted that burden from households, but has also availed thousands of children in The Gambia the opportunity to be empowered,” the deputy mayoress said.

The UNICEF Education Specialist, Nuha Jatta, who spoke at the function on behalf of the UNICEF Country representative, said this year’s theme is befitting to the present situation of the educational endeavours of the developing world.

“Across the developing world, 57million children are still out of primary school and an estimated 130 million children in school fail to acquire basic reading and numeracy skills, while another 120 million drop out of school within 3 years of starting,” he said.

Yusupha Sanyang, representing the Kanifing Municipal Council at the occasion, said his council “gives education all the prominence it needs” in their development agenda.

’’We at the council make education our top priority and give it all the prominence it deserves,’’ he said, adding that high level of literacy in a country reduces the rate of poverty in that country. 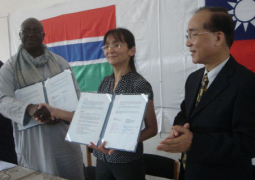