Ever since news surfaced that the Gambia Football Federation GFF has appointed its senior management staff, the body came under attack by voices opposed to the appointments with some accusing the GFF of appointing their friends and cronies and pursuing an all exclusive agenda.

On Tuesday, the Daily Observer reported that Abass Bah, a former finance official of the National Youth Council is now the GFF Secretary General while Kemo Ceesay formerly treasurer of the defunct GFA is now appointed as Finance Manager and Ebrima Manneh, coach of the Interior FC and formerly of Samger, as technical director.

However, an official of one of the first Division clubs described the appointments as clear testimony that the GFF are bent on pursuing an agenda that excludes people who holds different views with them on football matters.

Another critic said he suspected these developments since the unbanning of the lifting of the ban. “Why the need to cancel the appointments done by the Normalization Committee? These positions were tailored made to suit their cronies and that all,’’ said another.

However, the GFF spokesman Buba Star Janneh on Tuesday responded to these criticisms by saying that ‘’these comments are expected.’’

“Even if we hire you Lamin Cham yourself, they will still accuse us of trying to appease journalists by appointing one of them,’’ he said.Janneh also said the entire process of filling these positions have been transparent from start to finish.

‘‘In fact all the applications were sent to Fifa for short listing and interviews done here in the presence of a Fifa official,’’ he said.

On the allegations that the position of General Secretary was reserved for Mr Bah as he was not even in the country and had to be interviewed via skype, Janneh said Mr Bah was in the country when he submitted his applications and was among those shortlisted.

Meanwhile, it has also been reported that Ismaila Njie who has been acting as finance manager during the transition under the Normalization committee will now be deployed as accountant. No word has so far come forward regarding the fate of the acting secretary general, Marcel Mendy who until his deployment to the GFF was executive secretary at the NYC.

The senior management positions were earlier filled by the Normalization Committee who appointed personnel shortly before it left office but those appointments were rescinded by the GFF and the positions re-advertized.

A reliable source told The Point that a Fifa official, Francesco Branco was in the country at the time of the processing of the applications.

Contacted to confirm these developments on Monday, the GFF second vice president Kebba K. Touray said at the time that as far as he knows no body has been appointed yet.

The GFF president Mustapha Kebbeh when contacted said he cannot confirm or deny news of the appointments and would prefer the media to wait for a press release from the GFF on the matter. 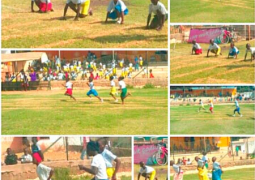