Coach Paul Put, a Belgian with 20 years experience, will to day put pen to paper at the President Jammeh's Joint Officers Mess, Kotu at 14;00pm. To start his preparation for the World and African Cup qualifying rounds slated for June 1st when The Gambia will be visiting Liberia in Monrovia before playing Senegal in Banjul on the 6th of June 2008.

Meanwhile the biography of Coach Paul Put is as follows

Born in Belgium 52 years ago, he started his professional coaching career 20 years ago with the Tubanta FC, a fourth division team in the Belgian league. He helped Tubanta gain promotion to the third division league, and in the process, landed them with many trophies before joining the one-time Belgian division two giants, Saint Nicolas, in 1994. He had exciting seasons with Saint Nicolas before moving to KFC Tielen in 1996.

In 2002, Coach Paul Put was hired by SP Lokeren, the former club of the Gambian international, Seyfo Soley. During his spell at Lokeren, Coach Paul Put made tangible and substantial progress by giving his team a well-deserved spot in the UEFA club competition.

Mr. Put also coached SK Lierse FC in 2005 and led the team to the Belgian cup semi final. The ambitious coach guided his new club Moeskroen FC to the Belgian cup final, before shifting gears to Guinea Conakry in 2007 where he is now serving as a coach and technical director. Among his many other football related responsibilities are to coach FC Satellite and also to technically develop the local players for the Belgian market. 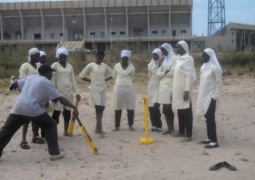