The controversial constitution of the Gambia Football Association (GFA) has been finally passed when delegates voted 27- 20 on Saturday to adopt the document, which has been a centre of hot controversy that raged for well over one year.

It was previously rejected last year on December 8 but Fifa had called for another congress without regional football delegates who the world football body said were from ‘ghost clubs ‘who had not played effective GFA football competitions.

At the second congress last weekend, 48 of the 54 delegates from the first and second division male and female clubs and four regions LRR, URR, NRR and CRR participated in the deliberations and with only one abstention, the Yes vote scored 27 against the No vote of 20.

Announcing the results at a stormy press conference , GFA Normalization Committee vice chairman Omar Sey  said it is traditional that after such a congress the results are sent to Fifa to analyze the nature of the votes, examine the rights of votes, the abstentions and absenteeism, for them to make a proper opinion of the legitimacy of the congress.’

But he added that in this case it is very clear that the result is a clear majority for the Yes vote.

He said the passing of the constitution now means his Normalization Committee now have to move on to brass tasks now, to put in place the necessary structures as envisaged in the constitution .’

“If we all move on now, we would enjoy the support and goodwill of Fifa, Caf, and more importantly of course the Government of The Gambia and other partners,” he said.

Also addressing the press, Sports minister Alieu Jammeh thanked the delegates for attending the process and expressed his and government’s appreciation of the decision to approve this important document in Gambian football.

Government being a critical stakeholder in sports is therefore keenly interested in the development of football and in this process.

“I must say that compared to the last congress I am very satisfied and would like to convey the warm appreciation of government to the delegates and all who came here including of course Fifa, whose presence through Primo Carvalio is most important.

To add clarity to the process, Minister Jammeh stressed that no member of the Normalization Committee is allowed to contest in the next executive elections in June. “In fact we are looking forward to a young generation of leaders,’’ he said.

The Minister said the adoption of the constitution marked a great move forward during which key components of football, e.g. schools sports, and a strong secretariat of football among other things can be revived and put in place so that the decades of disappointment in football can be changed for the better.

“I urge you the media to join us all in marching forward to take football to where we all desire,’’ he said.

Fifa representative Primo Carvalio said the passing of the constitution is a very good development for the future of Gambian football.

He said he was even surprised that some people voted against what was for all intent and purposes a very good document which is designed to develop their own football.

“I have been here for the fourth time now and from all what have known in Gambian football this the best moment,’’ Carvalio said.

As usual of course there were voices of dissent. Alhagie Darboe, an official of Brikama United FC, accused the Normalization Committee of manipulating the process by mobilizing non-football stakeholders from the regions to ‘cook votes’ for the Yes campaign.

Mr Darboe argued that the majority of the clubs who are the most important stakeholders in the game had voted NO but their votes were outnumbered by people from the regions mobilized by Governors,’’ he alleged.

Another complainant, one Mr Fatty, an official of a club in Brikamaba, one of the ‘ghost clubs’ deleted from the congress delegates list, called the media to display player licences and other GFA league documents to illustrate his point that his team was playing in a proper league in the regions.

Responding to these claims, Minister Alieu Jammeh said he has no doubt about the legitimacy of the vote as the Governors are the first entry point of any development programme, be it sports or anything in the regions.

“So there is nothing wrong in working with them in any aspect of development in their regions,’’ he said.

On his part, Omar Sey described the accusations as a refusal to accept change. “We have repeatedly made it clear that the old system of doing things in the GFA is wrong no matter who was in charge then,” he said, adding: “People still choose to ignore that. If you are prejudiced, you are prejudiced, that is it.’’

He further said people now must focus on the future.

Mr Sey also accused some journalists of aligning themselves with the opposition camp.

“We are having another congress,’’ he described the atmosphere at a stormy press conference.

“Some of you are wolves in sheep clothing,” he jokingly took a swipe at the press.

In turn the journalists accused him of losing his cool and being intolerant to take questions relaying the concern of the opposition camp. 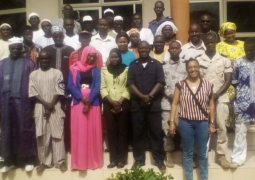