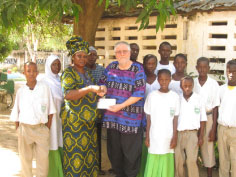 Circle of Friends Sukuta-Moormerland Association, a German-based organization, recently presented 5,000 Euros (equivalent to D215,000) to at a ceremony held at the school grounds in Sukuta, Kombo north, West Coast Region.

The donation, according to officials, was meant to be used to complete the construction of the school multipurpose centre including its assembly hall.

In receiving the cash on behalf of the school, Haddy Sosseh-Saidy, headmistress of the school, hailed their donors for the gesture, saying it was a step in the right direction.

No government can do it all, Mrs Sosseh-Saidy noted, thus there is need for support and intervention of partners like Circle of Friends to complement the efforts of the school and the government in realizing Millennium Development Goal 2.

The government has made education accessible at all levels, she said, adding that schools are built in every part of the country to ensure every child has relevant and quality education at all levels.

According to her, was established in 1970 and today the school is operating on double shift (morning and afternoon) with a total enrollment of 1,684 pupils.

Since the link started in the mid-1980s, the school has benefited a lot from its German partners of Moomerland and Circle of Friends, through the construction of classroom blocks, provision of a well equipped library, building of home economics block, staff room, computer lab and now the construction of a multipurpose centre in the school among others.

She thanked and commended Holger Schneider and his colleagues, particularly Dr Anna Stelt Hove Fend, who provided 1,300 Euros for upgrading the library and salaries of the librarians.

She assured them that the fund will be used for its intended purpose, while pledging her school committee’s plans to raise funds to be able to complete the centre.

For his part, Mr Holger Schneider, the chairman of Circle of Friends Sukuta – Moormerland Association, on behalf of his organization and Lions Club from Leer in Germany, stated that the idea of the link came far back in the early 1980s when he first visited The Gambia as a tourist, during which he was confronted by young Gambians wanting to learn how to speak German.

Through some Gambian friends, he explained, he got to know Sukuta Primary School and later saw the need to partner with Sukuta Secondary Technical School now Upper Basic School, then there was only eight classrooms in two building blocks.

“With our intervention since we linked up, today there are more than twenty-five classrooms, with kitchen, library, science lab, staff room and currently supporting the construction of a multipurpose centre in the school,” he said.

He commended the students of , SMCs, the Parent-Teacher Association and the community of Sukuta for the warm welcome and hospitality accorded them. He also advised the school management to ensure the money is put into good use.

Sainabou Faye, a grade nine student, on behalf of her colleagues, commended the donors for their gesture, saying if completed the centre will serve its purpose because examinations, fund-raising and extracurricular activities among others can be staged at the centre. 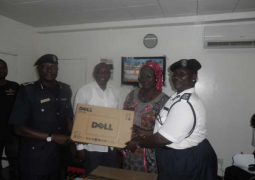 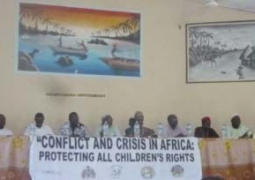