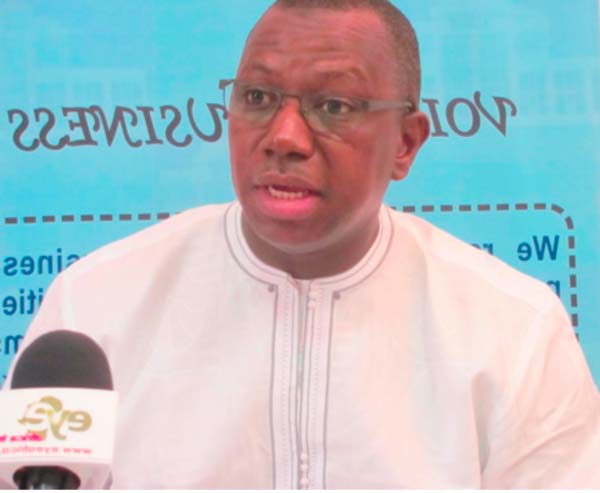 The Gambia Chamber of Commerce and Industry (GCCI) has cleared the air about its take in the latest border closure between Senegal and The Gambia.

About two to three weeks ago, it has been reported that The Gambia and Senegal have closed their borders at each other to prevent commercial vehicles from entering each other’s territory.

GCCI’s Chief Executive Officer Alieu Secka, who briefed the media at the weekend about their recent findings on the border closure feud, said: “From the onset, the GCCI wishes to clearly confirm that it has no responsibility on sovereign matters, which is the prerogative solely of the Government of The Gambia, and as responsible citizens we respect totally.”

He said the business community in The Gambia appreciates the “tremendous support and partnership” that government has extended through its “regular engagement with the GCCI”, and particularly its numerous declaration of the private sector as the engine of growth in all its Policy documents.

“Whilst the public may not hear us every day,” Mr Secka noted, “we want to reassure you that we work constructively with the public sector, and many times find very good solutions together.”

Veering into the border closure, Mr Secka said: “I can confirm that the GCCI President Muhammad Jagana and myself went to visit the Amdalai-Karang post last week, and that The Gambia border is open and free to all.

“However, when we visited the Senegalese side, the Police and Customs officials at Karang informed us that whilst they were open and ready to process goods and persons, the Senegalese transport union had blocked the roads to all Gambian vehicles. We have been informed that the same applies now to Kerr Ayip.”

Whilst there should be free movement of trucks/goods until they reach their final destination, going by the ECOWAS protocols of free movement of persons and goods free of any charges in the sub-region, as well as several other protocols including the Inter-State Road Transit (ISRT) to facilitate and grow trade among member countries and their economies, the opposite seemed to be the case between some member countries.

“Regrettably, at the end of last year, the Senegalese authorities decided to introduce processing of all transit documentation, which will now take place in Dakar,” Mr Secka said.

“This causes many days delay at all border posts, as economic operators and truckers can wait for up to 7 days to go and collect such authorization.

“Secondly, economic operators have reportedly being made to pay informally and withoutreceipts,for escort fees of 75,000CFA, processing fees of 300,000CFA and exit fees of 26,000CFA, totaling some 400,001 CFA en-route, among others.

“Thirdly, despite all ECOWAS signing the ISRT Protocol, Senegal has not ratified its bilateral agreement with The Gambia to date, even after we have made two visits.”

Mr Secka said The Gambia had always been competitive in the regional trade due to her deliberate policies of economic liberalization and simplified processes, which makes business sense to many who import and transit their goods to the region.

He said they had also contacted the Dakar Chamber of Commerce and Industry, which is the national Chamber representative and informed them of these incidences, and await their feedback.

“We are further in touch with the Ziguinchor Chamber of Commerce, where most transit passes, and as part of our regular consultations including other stakeholders, had planned a meeting for this weekend, which is postponed,” the GCCI CEO said.

Mr Secka said the economic impact of the present border impediments is huge and is adversely affecting both countries.

“On average, just on the transit trade, you would do up to 10 trucks passing through. So by the end of the year you can be talking about at least between four thousand five hundred to six thousand trucks that pass through Senegal,” he told journalists, adding that half of this number of trucks or commercial vehicles goes through Senegal and the rest through Guinea Bissau, Mali and Conakry.

Most of the commercial drivers plying the routes across the border of both countries, who are mainly ECOWAS citizens, are now left in limbo as well as the local communities in these regions and the border towns, shops and all those that depend on such transit trade for their livelihood, the GCCI CEO said in expressing concern.

He said the Chamber, being the apex body of the private sector in The Gambia, would continue to make all the necessary efforts to ensure that the border closure problem is solved.