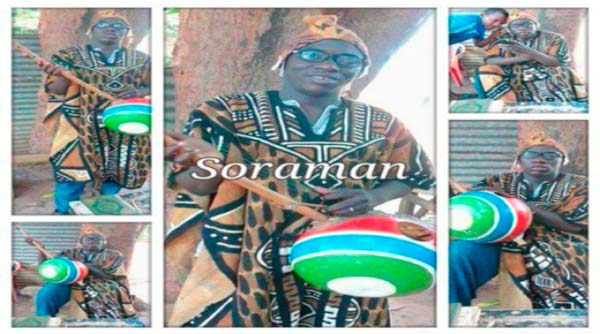 Following the launching of his album entitled “Mansa Feleh”, rising Gambia cultural star Soraman has applauded and thanked President Yahya Jammeh for the “unimaginable development” he has registered in The Gambia since he came to power on 22 July 1994.

Having successfully launched the four-track masterpiece, the Gambian cultural star said he would like to thank the president and the people who helped him to successfully produce the album.

He also thanked the chief launcher, Mr B. Jawara, the Gambia consul to China, Hon. Babou Gaye Sonko, National Youth Mobiliser for APRC, the Sarahule community in The Gambia, and all APRC members in the country.

He pointed out that as an artiste, a music album of such value could be part of his contribution towards national development through culture.

His intention, he said, is to tell the world what President Jammeh has done, adding that the President has registered a lot of development for the country, which motivated him to come up with the four-track album entitled: “Mansa Feleh.”

He said President Jammeh is a man of peace and wisdom and “has developed the country beyond expectations”.

“President Jammeh has done a lot for this country and has transformed it to a modern state,” Soraman added. “He has also made the Gambians all over the world proud because of his noble deeds and leadership qualities.”