The Gambia Chamber of Commerce and Industry (GCCI) on Wednesday briefed members of the press ahead of its forthcoming “Marche Jula” scheduled from 28th to 30th October at the Buffer Zone in Tallinding.

Speaking at the GCCI conference hall, Almamy Taal, Chief Executive Officer of the GCCI, said this was the first time for the Chamber to organize such an event, and that they hope to make it annually, and even decentralize it, if successful.

According to , the objective of the event is to give small-scale and medium enterprises the opportunity to come and sell their products.

He stated that the GCCI is working on improving its services to members, adding that they need to inform those who are not yet members of the GCCI to also join, so that they can also benefit.

He told journalists that the event is targeting the fast approaching Muslim feast of Tobaski, and that things that would be sold there are things that people will need for the feast, among others.

“We are looking at what the demands of the people are, and try to supply it,” he remarked, adding that their “main concern is the informal economy we have in the country”.

“We have a large informal business sector, but the Government is looking to see that all businesses are registered formally. We have been trying to amplify the needs and benefits of the business community,” he added.

“The cost of doing business is expensive, and I think we should look into the issue of bringing it down,” he said, adding that he and his team are ready to work and achieve the vision of the Chamber.

further stated they are trying to create space for both their members and non-members, and that they are not in for any competition.

She noted that the event is also meant to attract new members for the GCCI.

Noting that the response so far is positive, Ms Bah-Njie said the GCCI  is trying  to get as much business enterprises as possible to participate in the event.

Sarata Konateh, manager of Business Development and Research at the GCCI, said the event will give different business partners the opportunity to sell their products at a cheaper prize, for people to be able to buy.

According to her, the event is going to be a learning experience, as it is the first of its kind. 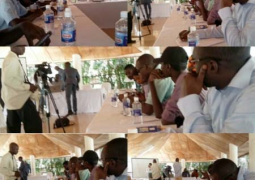