After losing to reigning champions GAF Gamtel/cel female side were eager to put up a strong fight against their opponents, Brikama in search of the first 3 points at Box bar on Friday.

The first set opened with Gamtel/cel advancing quickly to a 5-2 lead. With Sainabou Tambedou’s spike and fine blocks that countered spikes by Brikama players, the telecom giants managed to maintain their lead and gaining consecutive points before the first technical timeout. After the timeout, the pace of the game intensified as Brikama began to chase after, executing powerful spikes which were out of the visitors reach.

However, Gamtel/cel remained focused and spikes by Tambedou and Isatou Sanneh ensured that the score remained in the visitors’ favor at 25-18. The second and the third set were an easy ride for the telecom giants as they silenced the home fans at 25-5, 25-8

Determined to continue their good form from the first set, Brikama boys got off to an excellent start in the second set as well, racing into the lead at 2-0.

However, YMCA continued to challenge their lead with their fierce spikes, and they managed to reduce the lead. Brikama followed up with relentless play by and calmly settled the second set. Down to 18-12 in the third set, hopes were dim for Brikama. They had been wiped off the court in set three and were facing a deficit that in most matches would be unreachable.

Out of the timeout Brikama would respond to win the third set 25-22 and were once again in control. The hosts set and appeared to have brushed off the disappointment of losing set three and YMCA were pinned to 22 points as Brikama men Team earned second victory in the league.

On Saturday at East Park Interior beat Prisons in both men and women games. The police men rebounded from the 3-2 lost to Brikama fortnight ago and this time in a resounding 3sets to nil triumph against new comers Gambia Prisons Services.

The female team as well put up the same definite match against the minnows in a 3 sets thriller. And finally on Sunday GAF beat Serekunda East Olympia Africa to climb top spot in there female league while in the male league it was marred with violence thus incomplete. 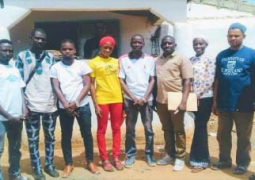 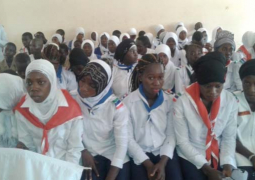