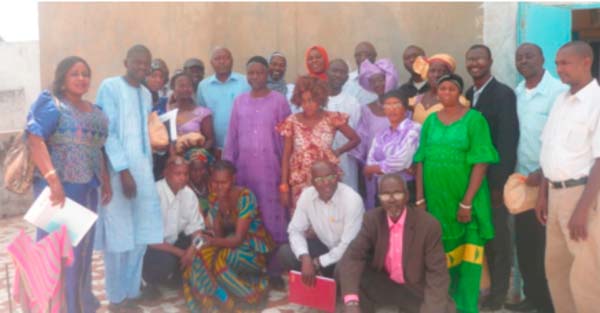 The Gambia Network of AIDS Support Societies (GAMNASS), an umbrella body of HIV/AIDS support groups in The Gambia, Tuesday inaugurated its board of governors at a ceremony held at its office along Kombo Sillah drive.

The board of governors coordinates the activities of its members and provides leadership in their involvement in the national response to HIV/AIDS.

The board members are Ebrima Sarr of Allatentu Support Kafoo as chairperson while other members are Alimatou Jarjue of Mutapola, Sally Jarhue of Lillahi support society, Mustapha Drammeh of Kubejara Basse, Kaddy Jarju of Jiwoolenora Sibanor, Bakary Sanneh of Nyodema, Ousman Sowe of CCM, Dawda Joof, a consultant, Jerreh Drammeh of EFSTH, Key Sey and a lawyer yet to be determined.

In his statement, Ebrima Sarr, Board Chairperson, said the board of governors was selected by the 11 support societies with six support society’s president to serve for the first term, while the remaining six will continue the second term.

He described the occasion as an exciting time for GAMNASS as they continue to grow, strive to remain as adaptable, motivated and responsive to join with partners in the fight against HIV and AIDS.

Mr Sarr stated that as GAMNASS president, his aim is to promote the welfare of people living with HIV/AIDS in The Gambia by creating understanding, togetherness and teamwork with support societies and partners for their betterment in the fight against HIV/AIDS in the country.

He added that among his objectives is to also advocate for capacity strengthening of members in order to enhance their participation in the fight against HIV/AIDS with support from partners.

He thanked everyone that had been supportive to them over the years, saying they should be proud of their accomplishments, as well as be excited of where they are heading to.

He urged everyone to stay engaged, as well as be proactive and help share the future of people to live together without stigma and discrimination.

Ousman Badjie, National AIDS Secretarial Director, in his statement, thanked them for going through this important governance process.

He noted that governance had become so important in the eyes of donors that if they get it wrong they would face challenges in terms of getting funding.

He urged them to take the lead in the major processes involved in the exercise, while he commended them and assured them of NAS support.

Sulayman Kinteh, procurement specialist at ActionAid International The Gambia, in his remarks, described the occasion as an important and key step towards achieving the aims and objectives of GAMNASS.

He said they had no doubt that the selected members are capable of doing the job, as well as living up to expectations.

Sira Horeja Ndow, UNAIDS Country Director, in her closing statement, also described the occasion as a major milestone in terms of the response, as they have now gone through an important governance process and also developed a constitution.

She further described the day as leading by example and, therefore, congratulated GAMNASS.

They have a huge responsibility as the umbrella body of the network of AIDS support societies, she told GAMNASS, saying they have to put good governance and accountability mechanisms in place.

She challenged them to be also consulting with partners on some of the decisions they make, as well as on their interventions and results they achieve to enhance confidence.

She urged them to bring and work together with all relevant stakeholders, as well as have all their mechanisms in place.