The Banjul Magistrate Court yesterday convicted and sentenced a man to a fine of D10, 000 in default to serve three months in prison for saying that “Senegal will attack The Gambia.”

Karamo Saidy Fatajo, a businessman at the Albert market in Banjul, was earlier arraigned and charged with conduct conducive to a breach of the peace.

According to the particulars of offence, the convicted person on 16th December 2010 at Banjul Albert Market in the city of Banjul conducted himself in a manner conducive to a breach of the peace, by saying that “Senegal will attack The Gambia”.

In his plea of mitigation on behalf of Karamo, defence counsel L.K. Mboge told the court that the convict is a family man who is living from hand to mouth. He added that the convict had shown remorse, and was also regularly coming to court since the case commenced.

“I therefore urged the court to temper justice with mercy,” he added, pointing out that a custodial sentence would cause more hardship to the family.

In passing sentence, the trial magistrate told the court that he had listened to the mitigation of the counsel for the accused person.

However, the offence committed was a serious one, he added.

Consequently, the magistrate convicted and sentenced Karamo Saidy Fatajo to a fine of D10, 000 in default to serve three months in prison. 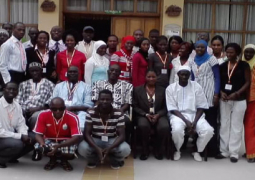