Held at Gamcotrap head office in Kanifing, the forum attracted thirty media practitioners from both the print and electronic media from across the country.

The aim of the forum was to bring media practitioners together to discuss with them issues relating to FGM, its negative impact on the girl child, as well to popularize UN resolution 67/146 to Ban FGM and Early/forced marriage and carve out the best way forward in the best interest of the girl child.

In her statement, Dr Isatou Touray, executive director of Gamcotrap, said that over the years, the Inter-African Committee (IAC), in collaboration with the UN system and the international community, has made many efforts to address the practice of FGM, early and forced marriages.

She further stated that it is in this light that the Inter-Africa Committee on Traditional Practices is working closely with the UNFPA and UNICEF to support the one-day advocacy forum for media on UN Resolution 67/146 in The Gambia.

Dr Touray further stated that there is a general conviction and commitment that increased collaboration is needed in joint effort to achieve a common goal ensuring the promotion of a human-rights-based comprehensive approach to promoting the elimination of HTPs, such as FGM and early/forced marriage.

For his part, the chairperson of Gamcotrap, Mr Sedia Jatta, stressed that the media has an important role to play in creating awareness for the public on the need to end FGM.

According to him, sensitizing media practitioners for better understanding of issues surrounding FMG and its negative impact is key and timely.

GPU Secretary General Gibairu Janneh hailed Gamcotrap for organizing the sensitization workshops for media practitioners on the need to end to FGM practice. 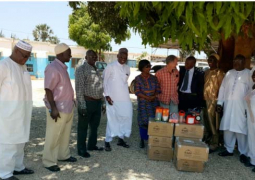