Alieu K. Jammeh the minister of Youth and Sports has said The Gambia has gotten into a situation that could kill Gambian football.

Speaking to reporters Thursday on the sidelines of the May Day Sports events, minister Jammeh added: “What has happen to the country can be equivalent to killing football.” “You have a bad name everywhere, and nobody is interested anymore,” he further stated.

He said he has even “heard players saying they will hang up their boots, and quit football.” adding that, “we are in a more serious situation than changing the guards (people in charge) as that is equal to shifting one person from the post and bringing someone else.”

“Internationally, The Gambia has already got a bad image; nationally people are disgruntled; there is no trust,” the minister further stated, adding: “if we have to move on, they have to get people replaced quickly so that there is no disruption.”

The Sports minister described the suspension as a bitter pill to swallow, but added that they will regroup and do things better.

Everybody was disappointed and sadden by the Gambia’s U-20 disqualification, according to minister Jammeh, who said he had been following activities coming from the National Sports Council (NSC), and was pleased with the matured manner in which they handled the situation.

That the task force came up with a report recommending that the Gambia Football Federation executive be asked to “resign” goes to show the seriousness the NSC attaches to the matter, how much importance they attach to it, since it concerns every Gambian, the Sports minister pointed out.

The task force had moved quickly to look at what went wrong; who was responsible; and, the way forward, he continued, while commended the NSC for measuring up to expectations.

It was a bold decision for the GFF president to come out and take full responsibility for the situation, he went on, while aligning himself with the position taken by the task force in urging the GFF executive to resign.

“I am in support of the position taken by the task force urging the GFF Executive to resign,” he declared, noting that somebody had to be responsible, and “since the GFF have taken responsibility they need to do something.”

The authorities responsible for sports in this country will do anything that is in the interest of the nation, minister Jammeh assured journalists, while quoting from the press release earlier issued by the NSC, which stated that “The Gambia is bigger than anyone.”

If it requires taking a hard or bold decision to protect the image of the country, they will do so, he further assured journalists.

Earlier, the minister described Gambia’s suspension from all CAF competitions as “unfortunate and more than sad as the country is blessed with a lot of talented young people who look forward to plying their trade at the international stage.”

The suspension is a disappointment to players and the nation at large, but they will sit back, reorganize and begin a normalisation process, as there are a lot of things that needed to be put in place, minister Jammeh went on.

One of these is having a functional league that will go back to the grassroots, meaning the communities and schools.

“If we have all these in place, the queries of age that one should not be U-17 or U-20 will not exist, and we will identify the real talents and spot the people within the right age group; though I’m not saying the people playing in the various categories now are not suppose to be there.

“The fact of the matter is that, if we are not playing proper football in the country with enough and good competitions… if you look at the league, which is 3-4 months, and it is dead and nothing happens in the year, we cannot get good players through that process,” he added.

They will get the league properly functioning and give full support to grassroots sports, schools and community football, the minister announced.

“This is a national embarrassment, and the integrity of The Gambia is bigger than anyone, and so we cannot accept to be disgraced.”

“Be rest assured we will soon take action, and everyone will be satisfied with the decision of the National Sports Council as the government’s representative,” he stated, and went on to announce that they will “act according to the task force report.”

Further commenting on Gambia’s suspension from all CAF competitions for the next two years, Titao Mendy said they “will not accept very few people (GFF) punishing the nation. Be assured in a week’s time you will get all reactions from the National Sports Council,” he told reporters last Thursday on the sidelines of the May Day Sports events.

“It is painful for the young ones, because the U-17, U-20 and all categories are denied,” he went on, adding: “the decision taken by CAF is because of the malfunction of the GFF,”

Meanwhile, GFF President Mustapha Kebbeh also spoke to reporters on Saturday at the Ocean Bay Hotel, where he announced that they understand, from their investigations, that CAF’s basis (for its decision) “is definitely not a basis as it has to do with the passport of a player.”

It is an open secret that in The Gambia that no one person has two passports with the same number, as the passports are pre-printed and sent to The Gambia, he said, adding that as far as they are concerned, they have “never made a passport for any player.”

According to Kebbeh, “the passport of the said player (Ali Sowe) was done in 2011 and the claim CAF is making that wrong data was entered for the player was in 2012.”

“This is where we need each other, more than ever before, to get to CAF,” Kebbeh said, adding: “Look, already we have started a process legitimately to engage them.”

“This is where we all need each other, than going to blame each other. Let’s safe our country; The Gambia is bigger than each and every one of us.

“We need each other today more than ever before, if we are sincere and genuine in our cause for the development of football,” he concluded.

In a related development, the Executive Committee of CAF, under the chairmanship of CAF President Issa Hayatou, met on 29 and 30 April 2014 at CAF headquarters in Cairo, Egypt, according to a report on its web site – see full story on our sports page.

The report stated that “the Executive Committee has finally decided to suspend the Gambia Football Federation for two years from all CAF competitions in line with Article 37 paragraph 1 of the regulations of the African U-20 Championship, which states: “for any deliberate intention to foul or cheat in any matter involving the falsification of documents, the defaulting association shall be suspended for two years from all CAF competitions…

“The CAF President reiterated zero tolerance in such cases of fraud, and urged members of the Executive Committee to continue strict enforcement in these cases to permanently rid African football of practices violating ethics and morality.” 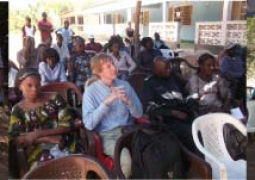