The dollar reserves of the Central Bank of The Gambia (CBG), which is used to finance the government’s external payment imbalances or influence the exchange rate, has dropped, the Monetary Policy Committee of the CBG has said.

The CBG Governor, Amadou Colley, said The Gambia’s gross international reserves have reduced from US$160.3 million in October 2013 to US$132.6 million as at end-October 2014.

Governor Colley, also the chairman of the MPC, while reading the quarterly report of the committee on Tuesday, said the reduction of the dollar reserves is attributed “mainly” to the weak external sector.

The MPC keeps track of the domestic and international economy and reports to the public quarterly through the media.

The reduction of the reserves indicates the government’s ability to pay for imports and service debts to foreign creditors has reduced, and it makes the country more vulnerable to external shocks.

Although the reserves have dropped, the country’s balance of payments deficit has declined when compared to the figure of 2013.

Governor Colley said income from tourism increased to US$57.93 million, reflecting in the main the 11.3 per cent increase in tourist arrivals in the first half of 2014 compared to the corresponding period in 2013.

The outlook of the Gambia economy for 2014 remains bleak and this according to MPC’s observation is partly as a result of the impact of delayed rainfall on agriculture and partly the adverse effect of the Ebola outbreak on the services sector, particularly tourism.

Governor Colley said the country’s Gross Domestic Product (GDP) is expected to be subdued and the risk is assessed to be on the downside.

This increased deficit could be as a result of lower-than-projected revenue performance of the government.

Governor Colley said the country’s total revenue and grants stand at D6 billion, equivalent to 16.2 per cent of GDP, below the target of D6.3 billion, 16.5 per cent of GDP.

“The underperformance of the outturn was as a result of the shortfall in personal income tax and project grants by D5.60 million and D343.4 million below their targets respectively,” he said.

While the country’s revenue performance was below expectations, its total expenditure and net lending increased from D5.98 billion, equivalent to 18.3 per cent of GDP, in the first nine months of 2013 to D7.4 billion, 19.8 per cent of GDP, during the period under review.

This is even higher than the amount of D7.3 billion projected as the government’s expenditure for the nine months.

From the CBG Governor’s explanation, the bulk of the government’s spending was not on capital expenditure, but current expenditure the majority of which was on wages, salaries and allowances, other charges and domestic interest payments.

In the year to end-October 2014, volume of transactions in the foreign exchange market increased to US$1.44 billion or 12 per cent.

As the dalasi continues to lose value inflation is hiking.

“However, the MPC projects that inflation would fall within the target in the medium term,” he said.

Based on the rising inflation and falling value of the dalasi, the MPC has decided to leave the policy rate unchanged at 22.0 per cent.

“The MPC would monitor price developments and continue to take appropriate policy actions to contain inflation,” the MPC chairman said. 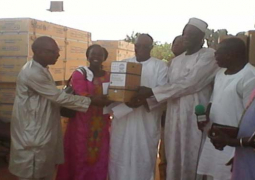 UNFPA gives $300,000 worth of supplies to health ministry 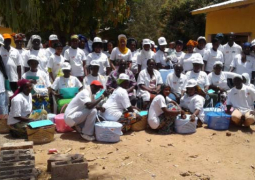