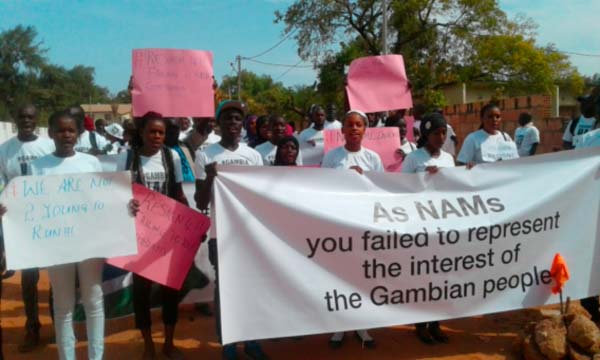 The youths from diverse groups held placards and posters indicating that the National Assembly Members had failed to represent the interest of the Gambian people, hence they are calling for their “resignation”.

They accused the country’s lawmakers of acting against democracy by declaring the State of Public Emergency, which the youths deemed as “unconstitutional”.

Modou Lamin Bah, Secretary General of Hopes of Tomorrow (HOT), said they were exercising their constitutional right by calling on the country’s lawmakers to resign, as they had disappointed the people of The Gambia by declaring a State of Public Emergency, which led to the fleeing of thousands of Gambians from the country during the recent political impasse.

The interest of the Gambian people should be the number one priority of National Assembly Members, Bah said.

“Instead they put their interest ahead of that of the people of The Gambia, which is disappointing,” he added.

Another youth activist, who showed his disappointment about the actions of the lawmakers, also asked for their immediate resignation.

Baboucarr Kebbeh said: “We are really saddened and angry with the National Assembly Members for declaring a State of Public Emergency on January 17, which led to the suffering of thousands of Gambians and even loss of lives in the process of fleeing the country.”

“The Gambian people have seen and known their intentions towards their own people, hence there is no need for them to maintain their positions,” Kebbeh added, and called on the country’s lawmakers to talk to the young people about the matter to avoid more embarrassment.