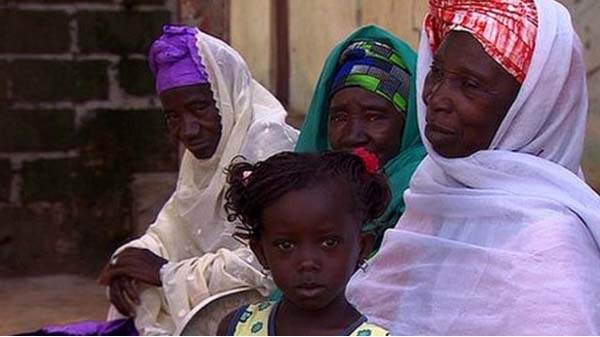 Fear of female genital mutilation (FGM) is grounds for seeking asylum in the UK, but campaigners say that hundreds of women have had such applications rejected. Newsnight’s Sue Lloyd-Roberts spoke to two women from The Gambia whose applications failed, and travelled to their home country to test their cases on the ground.

Fatima, a 23-year-old mother from The Gambia, was 10 years old when she was taken, along with about 200 other primary school children, out into the bush to be cut:

“There are two people holding you and then they cut it in one go,” she recalled. “And then you cry for the rest of the day. The pain is the worst. It is even more painful than giving birth and you have to live with it for the rest of your life.”

As an adult Fatima sought asylum in Britain to save her three-year-old daughter, who was born in the UK, from being mutilated too. The head of the family is an imam, she said, “so my daughter doesn’t stand a chance. If we return to The Gambia she will be cut”.

The threat of FGM is recognised as a justification for claiming asylum in the UK. However, the UK Border Agency has rejected Fatima’s claim. After three years, she has exhausted the appeals process and she and her daughter could be deported any day.

I travelled to The Gambia to try to find out whether Fatima was telling the truth, making the one-hour drive south-east from the capital Banjul to her village, Sohm.

I made the journey with Amie Bojang from Gamcotrap, a local NGO campaigning against female genital mutilation. On the way she explained that they have been successful in persuading about one third of communities in The Gambia to abandon FGM.

However, she said that, due to lack of resources, there are many areas they have not yet reached, including Fatima’s village.

We found Fatima’s mother in the family compound. She was welcoming but unequivocal: “If Fatima comes back, her daughter must be cut. If not, everyone will point at her and call her a ‘sulima’, an unclean girl.”

While in Sohm, the village head agreed to a meeting in which Ms Bojang spoke to locals about the health problems associated with FGM: children dying from loss of blood and infection, and death in childbirth - all problems which normally get blamed on witchcraft.

They listened, which was a promising start, but Ms Bojang said it takes years for people to turn their back on what is a deeply entrenched practice.

Not only has mutilation taken place for generations, it has also provided employment for generations of women. The Gambia has thousands of women circumcisers. Often they inherit the role from relatives, with expertise handed down within the family.

Ms Bojang took me to the town of Janjanbureh on the north bank of The Gambia River to meet several of them.

“We take pride in our work,” Aja Babung Sidebah said. “We cut the girls and then we sew them up them so that no man can interfere with them, then, the day before their wedding, they come back to us so that we can cut a hole to allow for penetration.”

The cutters say they enjoy great respect because of their role and are well paid. “I get £2 per child cut plus a bag of rice and clothing,” one said.

Ms Sidebah admitted having cut girls from the UK: “I don’t cut those who have one white, English parent. But, in the case of my daughter who is married to a Gambian there, I called her girls back here to cut them.”

However, she said she no longer works as a cutter having, thanks to a £100 grant from Gamcotrap, invested in a bakery instead. Another woman used a grant to set herself up as a goat herder with her own flock.

Back in West London, I met a 40-year-old Gambian woman who fled to the UK in an attempt to avoid her inherited role as a cutter. Maimouna Jawo said that after her grandmother, who was a circumciser, died, her mother began training her in the family trade at the age of 16.

One day she was required to hold her own blindfolded, five-year-old daughter on the ground while the girl’s grandmother cut her.

“She was screaming and calling ‘Mum’, but Mum is the one who is holding your legs and there is nothing Mum can do,” she recalled. “I was shaking my head and tears were coming to my eyes and I said in my mind that whatever happens, I will never do this.”

Ms Jawo said that she kept her decision to herself, fearful of the consequences if anyone found out. She showed me gaps in her teeth which she said were the result of a beating by a group of older women, meted out when she showed distaste for the job.

Shortly afterwards she travelled to the UK for her brother’s wedding and applied for asylum while there, but, as with Fatima, her application was rejected by the UK Border Agency and she is due to be sent back to The Gambia.

Ms Jawo claims that she will be killed if she returns. When I visited her family’s home in Wellingara village, her older sister had a similarly dim view of her prospects if she returned and refused to take up her role as a cutter:

“Everywhere among black people we have our traditions and if you don’t obey that tradition, something bad will happen to you,” Kombeh Jawo said. “I am telling you, anything could happen to her.”

The hold such traditions have in The Gambia was made apparent when I met Muhammed Alhajie Lamin Touray, the country’s most senior imam and president of the Islamic Council in The Gambia.

To which I retorted, “I have had a clitoris for 60 years and this has never happened to me.”

“Then you are an exception among women!” he said, laughing.

It was the laughing that I found most shocking. It was as if he was admitting to the absurdity of his position. Surely if he truly believes that the mutilation of young girls is ordained by God and is good for women, he would not laugh.

Both Fatima and Maimouna Jawo have been advised by the UK Border Agency that they should return to The Gambia and simply relocate, but both say such a suggestion shows little understanding of the country, where tribe is paramount.

“I shall not be safe because The Gambia is too small and they will know which tribe I come from,” Fatima said. “I could only be a prostitute. A woman living alone is seen as a bad woman. I will not be part of the society. It will be difficult for my daughter to be married.”

“Gambia is a very small country. There is no where you can live in The Gambia where the people cannot get you from there,” Maimouna Jawo said.

When Newsnight approached the Home Office to comment on its report, a government spokesperson said: “The UK has a proud record of offering protection to those in genuine need and every asylum application is considered on its own merits. Female Genital Mutilation is child abuse and has no place in our society. We are working closely with frontline agencies to help prevent women and girls from becoming victims and the Director of Public Prosecutions to help secure convictions.

“We also support overseas organisations who work to combat FGM, including funding a UN programme which has been working in Gambia since 2009. We are sending out a strong message - this practice is illegal and will not be tolerated.”