Pa Sulayman Njie, a Gambian professional player who is widely regarded as one of the key figures with Nuneaton, a youth team in the has set his sight firmly on guiding The Gambia U-20 team to a continental glory as he joined the team ahead of the qualifiers on Wednesday.

The 17-year-old English born Gambian midfielder who can also play as a striker is one of the two invited UK-based professional players, who has been given the chance to feature for their country by the Gambia Football Association, as the team prepares for African U-20 Orange Championship on 24th July against .

A day after arriving in ahead of the U-20 encounter, Njie who could not play any part in s success, as the club won the Birmingham Senior Cup Competition last season due to a fracture on his right hand has made his intention very clear in an interview with this reporter in Kanifing on Wednesday afternoon.

"I want to help my country re-write history by qualifying to the continental championship, as well as the FIFA U-20 World Cup.  I believe we can do it as a team, hence we’ve got the ability to help the team achieve the desired result," Njie who is highly-rated by his teammates as a result of quick movement with the ball, some amazing skills, as well as some positive attitudes, among other qualities told Pointsport.

He began his overseas career with a youth team, called Pinley in Coventry in the UK from 2006\07 where he managed to pave the way for himself with a big move to Nuneaton where he put pen to paper for a two-year semi-professional contract in 2008.

The 17-year-old who described his invitation to play for The Gambia as a surprise and a dream come true promised to contribute his part when the big event gets underway. 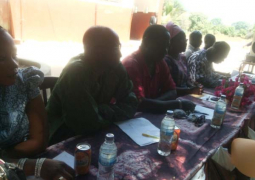