It is with great sorrow and sadness that we learnt of the demise of Imam Sarja Fatty of Tallinding, an industrious man whose immense contribution towards the development of this country cannot be quantified.

According to family members, his body was to arrive in Banjul yesterday and be laid to rest today at the main cemetery in Tallinding. To lose such a person is indeed, a big loss not only to the family, but to the entire nation.

The contribution of the late Saja Fatty to the promotion and propagation of Islam, and to the development of the country cannot be over-emphasised.

According to a younger brother, his brother's death has created a big vacuum in the family, adding that it will be very difficult to have someone who is as hardworking as the late Saja Fatty.

But we are saying that his absence would not only be felt by the family, but among others the Gambia Islamic Union, and the Independent Electoral Commission where he served as a Commission member.

His strong knowledge of Islam, especially of Sharia or Islamic law in which he specialised ensure that he lived a good life and in piety.

The attribute of this great man are many, and prominent among them is his devotion to Islam, sharing with people his little resources and preaching the right teachings of Islam.

This sudden death of a scholar of his calibre will no doubt be remembered by people who knew him for quite a long time. To his students, both young and old we encourage you all to continue praying for him in your prayers. Remember him for what he made you, what you are today and for showing you the way to live in life for that is what he needs from you.

The late Imam's studies at a university in Mecca, Saudi Arabia, availed him the opportunity to learn and preach the Holy Quran fluently.

We learnt that until his dead the late Imam Saja Fatty was very instrumental in The Gambia's development. He lived a fulfilled life, which made many scholars admired him.

We would like to urge the family of the late Imam Fatty to take the demise of their beloved one as God's wishes.

We also express our sympathy to the family of another illustrious son of The Gambia in the person of late Sameul James Palmer, who also contributed immensely to the overall development of the country. He is another great man who would always be remembered for what he lived for, especially in the area of health development. The establishment of the West Field Clinic, Gambia Family Planning Association, among others, are a clear manifestation of his commitment to The Gambia’s development.

May their souls rest in perfect peace. 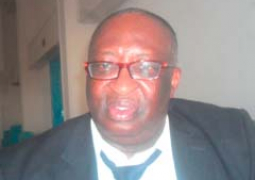