Every year women die of complications associated with childbirth, with most of them being related to traditional beliefs and practices that are deeply rooted in society.

These practices like FGM and Early Marriage continued to affect maternal and child health, as well as female sexuality.

Female Genital Mutilation (FGM) is a violation of human rights and a form of violence against women, says a press release issued by GAMCOTRAP.

The Convention on the Elimination of All Forms of Discrimination Against Women and the Convention on the Rights of the Child call on States Parties to eliminate harmful traditional practices, and the African Union Protocol on the Rights of Women in Africa explicitly calls on states to prohibit and condemn FGM, through awareness creation and enacting of law in order to eliminate the practice. The has ratified these treaties and over the year's members of relevant ministries, parliamentarians and civil society actors dedicate attention to discussion on measures to be undertaken to fulfill these obligations.

Efforts to raise the consciousness of the people include training with Gambian communities, professional groups as well as policy makers and the legislature. In 2005, GAMCOTRAP, in partnership with Save the Children, held a series of trainings and consultations with parliamentarians and these contributed to the passing of the Children's Act 2005 and the ratification of the Protocol to the African Charter on Human and Peoples Rights of Women in Africa (also known as the Maputo Protocol), in which Article 5 calls for enacting legislation against FGM.

To further these developments, (GAMCOTRAP) and the international NGO No Peace Without Justice (NPWJ) will organise a National Parliamentary Workshop today bringing together National Assembly Members, representatives of chiefs, members of the Judiciary, Civil Society and relevant government ministries to mobilise political and parliamentary will towards the development of legislation banning the FGM.

Their deliberation will be centered on: Situational analysis of FGM in The Gambia

Conventions on Women and Children ratified by The Gambia, FGM and Religion; effect of FGM on sexual and reproductive health and sexuality of women and girls.

It is expected that this training workshop will prepare the legislators to take the necessary steps to enact an effective law against FGM.

The forum aims to bring together parliamentarians, officials, and civil-society organisations to discuss the effects of the continued practice of FGM on women's and children's human rights, as well as sexual and reproductive health, to share strategies and best practices from other countries that have successfully legislated against FGM, to work towards a law prohibiting the practice of FGM in The Gambia. 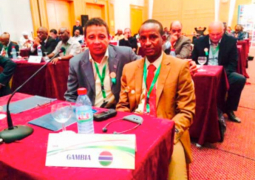