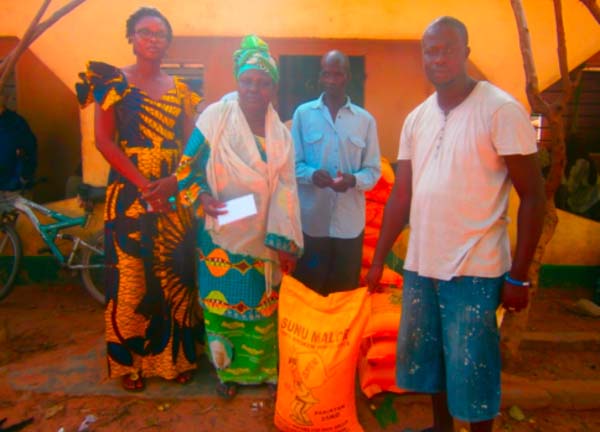 Friends of West Africa Group (FOWAG) based in America under the coordination of one Ousman Ndow, a Bijilo born Gambian based in the US, on Thursday donated some food aid and money to various Muslim communities and individuals in The Gambia.

The donation was part of FOWAG’s contribution to supporting the general Muslim community in The Gambia in Ramadan.

Friends of West Africa Group is a non-profit-making organization founded in Texas in February 2011, believes that education is the tool by which economically and socially marginalized adults and children can lift themselves out of poverty and participate fully as citizens.

The founder said the organization’s “goal is to help families struggling against the vast obstacles for the right to education by providing financial and non-financial assistance.”

“The organization also seeks to promote volunteerism among the youth by requiring that all sponsored students engage in at least ten hours of volunteer work per month,” Mr Ndow added.

He also said FOWAG seeks to break the barriers to education by providing assistance to the underprivileged children in West Africa, thus promoting individual freedom and empowerment.

Mr Ndow also stated that one of the goals of the project is to establish and foster strong relationship between high school students in West Africa and West African students studying abroad.

The total package of the donation of rice for this year was one hundred and fifty bags of rice comprising 25kg and 50kg bags, which were distributed to individuals, families, “who are very vulnerable in the society” across the regions of The Gambia.

The latest to benefit was the Muslim communities of Bijilo and Kerr Sering who got thirty-six bags of 25kg rice last Thursday at the Bijilo Lower Basic School grounds.

“This project has been ongoing for the past three years and is very helpful to the Muslim community in The Gambia, he said, thanking Ousman Ndow, founder of the organization.

He described Mr Ousman Ndow as a true and honest person who is always willing to share with communities in The Gambia.

“Therefore on behalf of the beneficiaries we are saying thank you for the benevolent gesture, which will go a long way in addressing some of our burden as most of the people find it very difficult to afford to buy a bag of rice for their families,” he said.

One Mamadou Jallow, a beneficiary, expressed joy over the donation, saying the items have been given to the right people in need of food aid.

He added that the intervention of Ousman Ndow in supporting the Muslim community in The Gambia is invaluable as it will address some of the burden of the less privileged.

He also seized the opportunity to thank Ousman Ndow for extending his support to Essau in North Bank Region and Basse in Upper River Region.

Also speaking on the occasion, Ida Sonko Ndow, wife of the founder of Friends of West Africa Group, said she was happy to be part of the presentation.

This organization is embarking on so many activities such as supporting students to further their education, helping the needy and giving food aid to the Muslim community in The Gambia.

“We are praying that every year we are able to do better,” she said, whilst thanking the donors for collaborating with the founder in ensuring the donation reaches the needy and poor in The Gambia.

He also assured the donors that “the items will reach the right people.”

All they need, according to her, is the fervent prayers of the people, especially the beneficiaries, for God to provide for them so they too can give more support to the people.

All the speakers praised Ousman Ndow for being “very patriotic and honest”, as they call for more help from international organizations like FOWAG.

A Businessman Donates 3,000 Bags of Rice to Charity

Put your houses in order