The revealing of the statement took place during the gathering at the Hartley Centre, Barking Road in London when Gambian imam Mohamed Sarr disclosed that donations towards the Mosque and Cultural Centre ‘now amounts to £54000’.

He further revealed that the amount is currently deposited with the Islamic Bank, while another account with the Barclays Bank will be released during their next Eid gathering.

Imam Sarr emphasized the importance of fasting and the offering of gifts to the needy, ‘especially the poorest amongst us’. He mentioned that it was such a valuable night that the Quran devoted a special surah to it: ‘Lailatul Qadr is better than a thousand months’.

He also added that such gifts can also be donated to ‘private projects such as the building of mosques’ and, therefore, all donations whether in cash or kind towards that will be ‘highly appreciated’.

He prayed for peace in the Senegambia region, as well as tranquillity and serenity in the continent.

Muhammed A. Gassama, deputy imam also delivered a speech in which he noted that any donation towards the welfare of the ‘Mosque and Centre will multiply 3 million times’ in favour of the donor.

He said that particular attention must also be made while delivering charity to people, adding that those who are ‘in need but due to modesty can’t ask for help’ must be considered.

People present at the occasion who spoke to The Point also revealed that this year’s gathering was one of the ‘most interesting ones’ not only due to the number of people present, but also the interest exposed. They added that another important aspect is the revelation of the bank accounts, which they said is vital for ‘transparency and clearness’, and will ‘encourage’ all donor.

Therefore, whoever wishes to support or donate can contact the imam or deputy imam, as well as other committee members namely, Momodou Camara and Hassan Sankareh.

The gathering was also an opportunity for ‘interacting and networking among the Gambian community’.This year’s gathering was attended by both the young and the old, including Baboucarr Cham a long-time resident of the area.

The congregation was also fascinated by the beautiful and elegant outfits worn by Gambians. 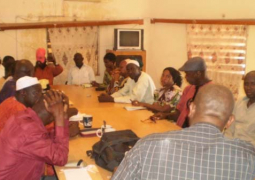 NBR elects new executive of Education for All Network chapters