Mr Lamin Jarju, a Gambian who had been living in Canada for the past twenty years has decided to come back to establish a horticultural farm, through an association called Penyem Jamorai Organisation, PJRO.

The organisation was formed in Canada as a charity organisation and registered both in The Gambia and Canada.

According to Jarju, who also doubles as PJRO’ Project Director, the charity was formed mainly to fight against poverty through sustainable rural development in agricultural irrigation.

The organisation intends to construct and maintain a solar water pipe line system to be used for drinking water and agricultural irrigation purposes.

Speaking at the model garden, Mr Lamin Jarju said after staying in Canada for the past twenty years, he deemed it fitting to come back home and engage in productivity ventures.

He said the rationale behind this green gas house is to ensure that the community engages in generating revenue.

Jarju further stated that his aim is to respond to the President Jammeh’s back-to-the-land clarion call.

He further expressed delight at the participation of the community in the new project, as he called on the need for collective efforts in providing farming implements to farmers, so as to boost agricultural production.

For his part, the Alkalo of Penyem, hailed the Coordinator for the good initiative. 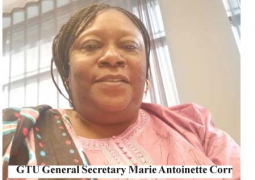 GTU urges members, students to stay away from 3 Years Jotna