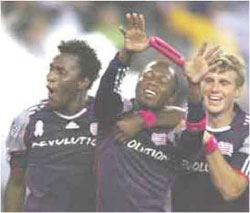 Major League Soccer side New England Revolution this week intensified their training at the team’s base in Foxborough, two weeks ahead of their second trip to

Gambian duo Ken Abdoulie Mansally and Sainey Nyassi and their teammates, in preparation for the trip billed for February 20, are undergoing two training sessions starting on Tuesday and Wednesday.

The trainings are expected to be rounded up with morning sessions on Thursday and Friday to better prepare players for the round robin FC Tucson Desert Diamond Cup, according to the team’s official website.

Mansally and Nyassi, who made the 2012 New England Revolution player roster, are expected to face MLS counterparts LA Galaxy on February 22.

They will meet the New York Red Bulls three days later before taking on Real Salt Lake on February 29 as part of the Diamond Cup competition.

The Revs will host a third-annual Supporters Summit at Gillette Stadium on Thursday, February 16, in preparation for this year’s season expected to start in March.

The event is entirely for registered members of the team’s two most recognised supporters groups – The Midnight Riders and The Rebellion.

At the summit, supporters will have the opportunity to dialogue with club President Brian Bilello and General Manager Michael Burns through a question-and-answer programme.

Topics such as player acquisition and strategy, club culture, business objectives, parking and pre-game activities, supporters’ away-game travel and security concerns, among other subjects of importance to supporters, are set for discussion.