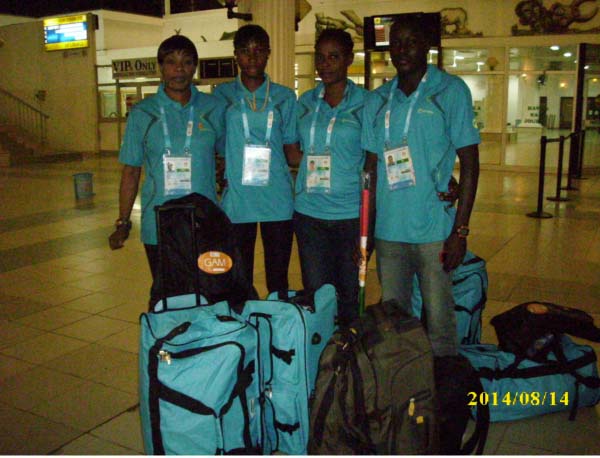 Gambian junior athletes Alieu Joof and Fanta Mbye, who last Wednesday left Banjul for Nanjing, China, to take part in the 2nd Youth Olympic Games to be held in Nanjing, has set their sight on bringing back glory to the country.

Speaking to reporters at the Banjul International Airport shortly before their departure, Alieu Joof said his target in the competition is to win a medal as well as improve on his timing.

He added that his aim is to raise the Gambian flag high: “I can do it just like others are doing it.”

He said he is fully ready for the competition, adding that travelling with a coach like Mariama Sallah,even though he had not been training much, he would be able to make it as they all work under one umbrella.

He does not see the competition as a challenge to him as he has been taking part in international competitions, he remarked, adding that seeing his fellows like Adama Jammeh doing well in the international scene motivates him to push for glory.

He knows what he is capable of doing, he went on, saying he heard China is far but them reaching two days before the commencement of the competition will not hamper their progress as they have a good coach who would help them.

Alieu pointed out that he had been following the progress of some of his international competitors and was ready to fight with them to the last drop.

He wants to break his personal record during the competition, he further said, while calling on all Gambians to pray for them as they are carrying the flag of the nation to the competition.

Fanta Mbye, for her part, said her target is to bring back home a gold medal, adding that she is ready to face any athlete no matter the country they come from.

They are ready for competition, she highlighted, saying she is not thinking of anything other than bring back glory to the country.

She as well targets a better timing, she said, also calling on everyone for prayers.

Mariama Sallah, coach for the two athletes, said the 100 and 200m sprinters are in good form going into the championship, adding: “They are the best junior sprinters in The Gambia.”

The selection of the two athletes was fair as they were the two best athletes during the inter-schools athletics competition, Ms Sallah said, noting that they were selected in the process and have been training all along.

At some point they were not sure if they would make it up to the competition due to the closure of the Gambia National Olympic Committee (GNOC) but fortunately the authorities reopened the bureau a day before their departure, she stated.

In Africa they have been doing well and are not afraid of any nation in the competition, she remarked, adding that she is sure the athletes would improve on their timing if they did not win a medal.

She has seen confidence in the athletes and is sure they will do well, she went on, saying they arriving two days prior to the competition will not affect them.

Mary Decker, Chef de Mission for the competition, said they are “quite very much ready as a team” and hope to bring glory to the country.

“I am impressed with their performance and hope they will improve on the good preparation they have,” she added.

The competition is for the athletes, as they are just there to guide and give them moral support, Ms Decker went on, saying she hopes their performance in their previous international outings will motivate them to do better in this competition.

The athletes have to be physiologically and physically ready, she noted, saying the GNOC had done its bit in ensuring the athletes participate in the competition positively.

Abdoulie Jallow, GNOC secretary general, who was also at that the airport to see off the delegation, said the kids deserve the opportunity to participate in international competition to show their talents and represent the country, and therefore thanked authorities for opening the GNOC Bureau.

The National Sports Council (NSC) press release to reopen GNOC in the interest of athletes and the nation speaks volume for itself, he remarked, noting that they (GNOC) will cooperate and work with the NSC.

The GNOC is compassionate about athletes, he pointed out, noting that they will make sure athletes are well taken care of to participate in all international competitions.

The preparation of the athletes has been ongoing, he went on, saying they made sure they had the right training, kits and allowance in place.

“Everything is in place,” he said, adding that he is sure they would make Gambians proud. It is fortunate that the Gambian flag will be flown among other nations’ flags during the competition now that the office is reopened, Mr Jallow added, while thanking authorities for reopening the bureau.

They are grateful to the NSC and hope to have a more cordial relationship, he concluded.

The four-man delegation that left Banjul on Wednesday 13 August 2014 barely 24 hours after the GNOC Office was opened comprise Mary Decker as Chef de Mission, Mariama Sallah as coach and Alieu Joof and Fanta Mbye as the two athletes to represent The Gambia in 100 and 200metres.

According to officials, each of both athletes was given an allowance of US$500 dollars.

The competition, which commences yesterday, Sunday 17 August, is expected to conclude on 28 August 2014. The team is due back home on 31 August 2014.