The Gambia Wrestling Association will this weekend organise a wrestling competition commencing on Saturday at the Buffer Zone between Augusto Tchouda of Guinea Bissau and Burama Sarr of Barra.

In an interview with Pointsports yesterday, Matarr Jarjue, president of The Gambia Wrestling Association, said the weekend wrestling bout will also witness the official opening of their new arena at the Buffer Zone, adding that after the opening every week the association will organise a competition.

He called on wrestlers to come on board to work closely with the association.

He said for the Saturday and Sunday competition the gate fee for adults is D50 and for children is D25.

He called on the general public and the private sector to support wrestling in the country. 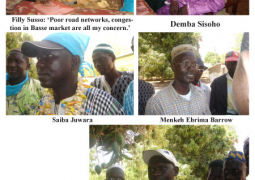