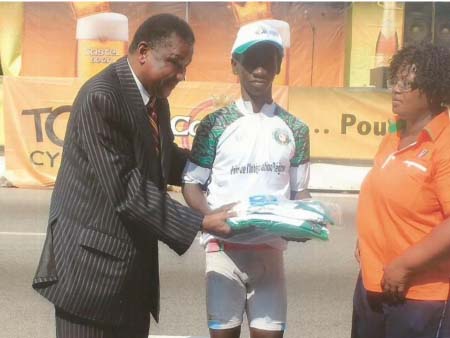 The Gambia Cycling Association team that returned home on Monday night after taking part in the 3rd Edition of the ECOWAS cycling tour which took place in Nigeria between 13 and 17 November 2013 has won the regional integration prize and a cash prize of US$170 with Buba Jobe also winning an individual fair play prize.

The competition, which featured 15 countries, saw Burkina Faso emerged as overall winners, followed by Ivory Coast on second position with Mali securing third position and then The Gambia winning the regional integration prize, fair play and a cash prize of $170.

Edrisa Sah, Public Relations Officer, Gambia Cycling Association, speaking to Pointsports yesterday at The Point offices, said the competition was meant for advocating for regional integration and free movement of goods and people within the ECOWAS region.

He said Sulayman Colley, a Gambian cyclist, had an accident during the tour after falling off his bike and sustaining a dislocated arm during the process but added that he was later treated and has fully recovered now.

PRP Sah appealed to the Ministry of Youth and Sports (MoYS) to advise the ECOWAS youth and sports development centre to have their own medical caravan teams when organising such competitions in order to be taking care of injured cyclists rather than banking on team doctors.

Sah also appealed to the MoYS to help provide the Gambia Cycling Association with national team bikes and jerseys of their own which will bear the names of the cyclists and the Gambian flag on the jersey.

Sah remarked that the cyclists were not used to the types of foods they consumed during the competition which caused them to have stomach disorders but despite this and other constraints they were able to do well.

“We would like to have our cyclists better prepared for international competitions and also be equipped with adequate resources to be able to win such competitions,” he said, adding that whoever prepares better is always likely to win the competition.

Sah thanked Gambia Cycling Association President, Abdoulie Baks Touray, and the MoYS who is said finance to be the trip for their participation in the competition.

The five-day race over four stages and 450 kilometers started from Nigeria’s National Stadium in Lagos, and terminated in the Ivorian commercial capital of Abidjan on 17 November.