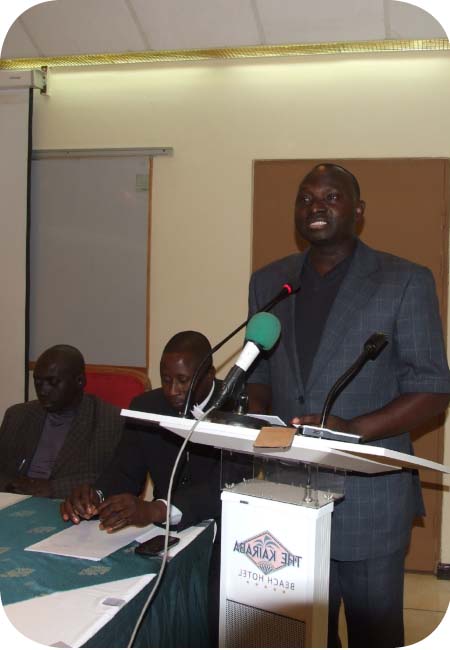 The Gambia has vowed to rectify key deficiencies in compliance with the implementation of anti-money laundering and terrorism financing recommendations.

This resolve was reaffirmed at the stakeholders’ workshop for the development of National Ant-Money Laundering and Counter Financing Terrorism (AML/CFT) Strategy held yesterday at the Kairaba Beach Hotel by the Inter-Governmental Action Group Against Money Laundering in West Africa (GIABA) and The Gambia Financial Intelligence Unit (GFIU).

The three-day workshop brought together officials from financial institutions and other essential stakeholders to collaborate on the fight to tackle money laundering and terrorism financing in The Gambia.

The officials,who will be discussing in the next three days effective mechanisms and strategies of combating money launderingand terrorism financing in the country,were drawn fromthe Central Bank of The Gambia, commercial banks, finance, interior and justice ministries, real estate industry, the Gambia Police Force, the Immigration Department and other relevant sectors.

In his address to participants at the workshop, the Minister of the Interior and NGO Affairs, Ousman Sonko, said: “I understand that the Inter-Governmental Action Group Against Money Laundering (GIABA) is providing technical support to The Gambia to develop Anti-Money Laundering and Combating of Terrorism Financing Strategy.

“This support is commendable as it will help the country to rectify the remaining outstanding issues highlighted in the GIABA’s Mutual Evaluation Report on The Gambia published in 2008.”

The minister added that money laundering has proven to be a menace to the world, and the efforts required in the prevention, detection and prosecution are enormous. “This is so mainly because of the sophisticated techniques used by criminals to launder money,” he said, adding that money laundering, being a global problem, requires an appropriate response at the international, regional and national levels.

Whereas The Gambia has done well over the over years in putting in place mechanisms to combat money laundering, there is still room for improvement, said the Gambia Financial Intelligence Unit Director Yahya Camara.

“GIABA as part of its mandates conducted a mutual evaluation exercise on The Gambia in 2008 to assess the country’s compliance with the implementation of the requirements of the Financial Action Task (FAFT) 40 Recommendations on Money Laundering and 9 Special Recommendations on Terrorism Financing,” Mr Camara explained.

“The report highlighted strategic deficiencies in the Anti-Money Laundering and Counter Terrorism Financing Regime of The Gambia.”

So far, Mr Camara noted, the country has made steady progress to rectify the existing gaps, but there are key deficiencies which remain outstanding, which they would try to rectify at the workshop.

He said some of the key outstanding deficiencies are the Non-Ratification of the UN International Convention for the Suppression of Terrorism Financing (New York, Convention, 1999);Non-Ratification of UN Convention against Corruption (Merida Convention, 2003); the Exclusion of Cash Transaction Reporting from AML/CTF Act 2012; no National Regulation/Mechanism for the implementation of the requirements of the UN Security Council Resolutions 1267, 1373 and subsequent UN Resolutions; no AML/CTF obligations on NGOs; Inadequate AML/CFT trainings for bank staff and other FIs especially foreign bureaus and insurance companies; low level of STR reporting; low investment in technology for AML/CFT measures; no ML/TF Risk Assessment has been conducted; lack of adequate supervision of DNFBPs sector; and lack of adoption of appropriate internal control measures against ML/TF.

According to Justice Mahoney, Solicitor General and Legal Secretary, who represented theAttorney General and Minister of Justice at the workshop, The Gambia has taken giant steps to put in place legal and institutional and other measures in place to fight money laundering and terrorism financing in the country.

He expatiated: “It is important to note that in 2002, The Gambia enacted the Anti-Terrorism Act. This was followed by the enactment of the Money Laundering Act 2003.

GIABA’s Director of Research and Planning Mu’Azu Umaru, who represented the Director General of GIABA, commended The Gambia for choosing to develop a national AML/CFT Strategy to serve as a driving force for deepening of its AML/CFT system.

“The strategy will be a home run and an acceleration pedal for the country,” Mr Umaru said, adding that GIABA stands ready “to provide the necessary support to The Gambia in order to enable it accelerate the pace of implementing the Strategy when it is approved by the national authorities.”

Money laundering is simply the process of making the proceeds of crime to appear to have legitimate origin. The proceeds or wealth to be laundered can be generated from a number of criminal acts.

“In the past, money laundering was mainly associated with trafficking in drugs. Today, the designated categories of offences are numerous and include sexual exploitation, trafficking in human beings, corruption and bribery, fraud, counterfeiting currency, smuggling amongst others,” Interior and NGO Affairs Minister Ousman Sonko further outlined.

The metaphysics of interfaith dialogue: sufi perspectives on the universality of the Qur'anic message