The tenth prosecution witness (PW10), Alassane Ndoye, yesterday told the court about the transaction with the accused, Momodou Sabally, before Justice Amadi of the Special Criminal Court in Banjul.

When the case was called, senior defence counsel Antouman Gaye informed the court that he had just been served with the additional summary of witness evidence, as well as some documents, which was about 35 pages and he needed time to consult his client (the accused) on them.

In response, DPP Barkun said the witness in the dock was not a new witness and he was number one in the witness list.

All they wanted to do was to tender some documents through him, and did not intend to tender the documents yesterday, so they could proceed with the witness testimony.

However, the defence objected saying the law was very clear that the accused be given the list of exhibits in advance to avoid trial by ambush.

The DPP then said he would withdraw the documents for now, so that the witness could proceed with his testimony, which he did.

In his testimony, Alassane Ndoye said he lives in Washington DC and is a contractor.

He knew the accused as the former Secretary General and Minister for Presidential Affairs, as well as Sheikh Omar Bah (PW1) and Sulayman Jatta (PW2).

Asked by the DPP how he came to know the three persons he mentioned, Ndoye said he knew the Alkalo of Bijilo Sulayman Jatta, who also knew Sheikh Omar Bah (PW1), who knew the accused person.

Sulayman Jatta introduced him to Sheikh because he came to The Gambia with two vehicles that he wanted to sell to the President but had difficulty reaching the President.

That was the time Sulayman Jatta told him that he (Jatta) would call Sheikh, a brother-in-law, who knew the accused, Ndoye further told the court.

Sulayman Jatta told him that he would introduce him to Sheikh, who worked with the accused together at the Central Bank before the accused became the Secretary General.

Ndoye added that he wanted to see the President to sell the two vehicles to him, and also to talk to the President about urban development because he had partners and investors in the US.

He said Sheikh told him he should not worry about that as he was going to Senegal, but when he returned he would take care of it.

When Sheikh returned from Senegal, he called Sulayman Jatta and told him he had spoken to the accused, and the accused wanted to meet them in his house.

At the accused person’s house, he (Ndoye) was introduced to Saballyand Ndoye explained his mission.

Ndoye told Sabally that he is a businessman in the US, and had brought two vehicles that were for sale to the President.

Later, they went out to see the vehicles and the accused told him that he was going to State House to answer to the President’s call, and would tell the President about the cars, Ndoye told the court.

He said he wanted to go back to Senegal since he had seen Sabally, but was told by PW1 and PW2 not to go because the accused might call back; and he decidedto stay.

After a short while, the accused called them to take the two vehicles to July 22 Square, and he, PW1 and PW2, drove the vehicles to State House, where they met General Badjie, Captain Tamba and Dibba, who inspected the trucks.

He said the accused then told him if he wanted to stay for the event at the square he could stay with PW1 and PW2, and Dibba walked them to the stage as special guests.

He said the President responded that if he (Ndoye) would help The Gambia or the Gambian people he would not regret it.

He said he then told him that they were packed at General Badjie’s office; and then went back to where he was seated and the event continued until around 2 a.m.

He said Sabally then told them to take the vehicles back home, and to bring them again the next day at 1 pm.

They brought the vehicles and parked them where the President parked his cars inside State House.

At that juncture, Justice Amadi said the witness should tell him something reasonable - that the witness cannot tell him that he parked the cars where the President of the Gambia parks his cars.

“Do you park cars where Obama parks in his palace in the US?” Amadi asked the witness.

Continuing his evidence, the witness said he spoke with Sabally about the paper work, and the accused told him to leave it with PW1 and Sabally (the accused) would collect it from him later. 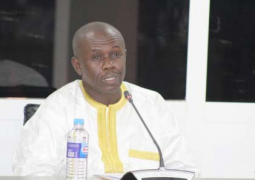