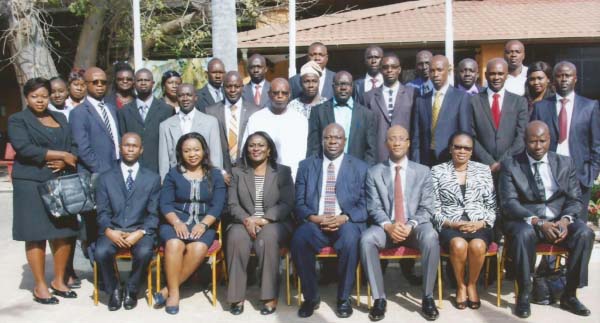 The training, organised by Africa Reinsurance Corporation, was held at the Kairaba Beach Hotel last week.

Speaking to The Point, at the closing ceremony of the workshop, Africa Reinsurance’s Regional Director Sory I. Diomande said the programme was part of series of seminars Africa Re organises every year.

He said that as market leaders, it is the responsibility of the corporation to build capacities across the continent, adding that The Gambia is a member of the 41-Africa member state reinsurance corporation.

The regional director said they are committed to the market, adding that the training, which was a very practical seminar with many case studies, focused on such areas and products as fire insurance and accident insurance.

He said The Gambia was proud to be a founding member when the Corporation was established in Yaounde, Cameroun, on 24 February 1976.

In 2005, he added, The Gambia was on record to have been the venue for one of the best, if not the best, organised AGMs, saying The Gambia is currently serving on the Board of Directors of the Corporation.

The corporation’s mandate from the founding member states has been to foster the development of insurance/ reinsurance activities at national / regional levels, achieving a better spread of risks, increasing Africa’s market capacity, and thereby contributes to the overall development of this part of the world.

Commissioner Sillah said the training was one of the many activities Africa Reinsurance has engaged itself in across its member countries to fulfill the mandate.

The theme for the workshop was quite relevant as reinsurance is the risk transfer mechanism through which insurers buy to protect risks that lie beyond their capacity and expertise, he said.

“As insurers alone cannot bear all the risks or absorb all financial losses resulting from catastrophes, unexpected liabilities and a series of large losses, they resort to reinsurers to bail them out in the event of a loss under either of two methods, namely Treaty or Facultative Reinsurance,” he stated.

Africa Reinsurance Corporation is the premier regional reinsurance institution dedicated to the African continent but open to selected markets in Asia, Brazil and the Middle East.

It conducts business in more than 60 countries and territories in this board region with a physical presence through operating offices in eight locations, he said.