Gambia, Taiwan Are Partners In Progress

The Ambassador of the Republic of China on Taiwan His Excellency Richard Shih has said that The Gambia and Taiwan are partners in progress.

The chief Taiwanese diplomat made these remarks on Saturday at the start of a massive clean-up exercise, organised by the Ministry of Tourism and Culture, in collaboration with the Taiwanese Embassy just a few days ahead of the 2009/2010 winter tourist season.

He said that they have recognised the importance of tourism to the country with great potential.

"Also today is a very important day for us, actually October 10th our national day" he said. According to him, they normally organise reception to mark the day but unfortunately because of the disaster that had happened in Taiwan two months ago they used the day to work with the Ministry of Tourism and other stakeholders to keep The Gambia clean and green.  He advised the public not to liter and to keep the environment clean at all times.

"If everyone can do this we definitely can keep the Smiling Coast clean and green," says ambassador Shih.

For her part, Honorable Nancy Njie, the Minister for Tourism and Culture thanked the government and people of Taiwan for their continuous support to The Gambia's development endeavours.

Minister Njie thanked Ambassador Shih and staff for the support. She noted that the two countries have shared a lot in common. Tourism Minister assured the government and people of Taiwan of The Gambia's unflinching support.

About two thousand people participated in the exercise among them were soldiers, the Taiwanese community in The Gambia, tour operators, hoteliers, bankers and fruit sellers.

The participants were drawn from different organisations and institutions, such as staff of Ministry of Tourism, alumnus of ICDF, officials of Hotel school, Tourism and Travel Association, Lamin Lodge, Thomas and Nor than Europe, GTA and Oceanic Bank.

The exercise was funded by the Taiwan International Cooperation Development Fund (ICDF). The sponsored provided cleansing materials, including a wheelbarrow, rakes, cutlasses, bags for garbage collection and T-shirts.

The exercise was carried out at the Tourism Development Area, as well as Bertil Harding Highway from the Kairaba Traffic Light to Brusubi junction.

Momodou Jabang and Mrs. Kumba, Conateh Na, the Vice President and Secretary- General of ICDF alumni association of The Gambia used the opportunity to extend condolence to the government and people of Taiwan for their recent disaster. They commended Taiwan for helping develop The Gambia's human resource base.

After the brief ceremony, Ambassador and Minister Nancy Njie led the volunteers to remove dirt from along the beach behind BB and diverse places of the TDA.

The opening ceremony was chaired by Mr. Momodou S. Jobe, the Director-General of Gambia Tourism Authority. 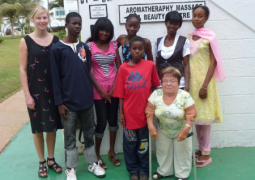