“You diligently study the Scriptures because you think that by them you possess eternal life. These are the Scriptures that testify about me, yet you refuse to come to me to have life.” (John 5.39-40)

In the Gospels of Matthew, Mark and Luke, the Apostles recount the story of a woman who had been nursing a medical problem for twelve years. In other words, she had tolerated her ailment for that long and had not received healing. Then she came to a point where she could not bear the shame and the pain any longer. It was even more daunting because she had spent all her wealth seeking help from doctors – but to no avail. “She had suffered a great deal under the care of doctors and had spent all she had, yet instead of getting better she grew worse.” (Mark 5:26)

One thing can be said of this woman, she wanted her health restored so badly she would stop at nothing. She knew it could be fixed and she wanted it fixed. She had tried all that her efforts could direct her to do, but without results. She was not ready to cave in that easily. She seemed to have said to herself that that sickness did not belong to her body. It was a battle she had to win and she had resolved in her heart to continue the struggle.

Yes, all she could do she had physically and financially done. Every remedy she had heard of she had tried. She had come to the end of the road when she was told about Jesus - a great healer. With the same zeal that she had pursued other avenues of cures, she determined in her heart: “If I just touch His clothes, I will be healed.” (Mark 5:28) Remember she had tried all other remedies without much benefit; what would it cost her to try something else new – particularly when there were no charges? Something deep in her heart told her she would get it right this time around; she was bound to hit the jackpot.

Jesus’ popularity had soared. It had even become difficult to reach Him or have access, not to talk of having an audience with Him. Some desperate friends of a paralytic had to tear someone’s roof apart for their friend to get Jesus’ attention. (Mark 2:2-5) Likewise, His family had to ask that He be called out from a gathering so they could talk to Him. “Now Jesus’ mother and brothers came to see Him, but they were not able to get near Him because of the crowd.” (Luke 8:19)

This woman knew therefore what she was up against and she weighed the odds. “If only I could get close to Him so much as to touch Him, I know I will be healed” she muttered to herself. She had only heard of the healing power of our Lord Jesus but had not experienced it. She had not witnessed any healing session, but she strongly believed – beyond a shadow of doubt – that her breakthrough was in sight. So she inched her way through the crowd – no doubt amidst obstacles and opposition. Being a woman among all those men would not have been to her advantage either.

She had more than it took Zacchaeus, the tax collector, who could not force his way through the crowd because of his height (he was short in stature). What with the nudging, elbowing and trampling? He was not ready to go through all that, so he settled for perching on a tree in order to get a glance of this man who was making waves in .

Their motives were different of course. Zacchaeus was curious to catch a glimpse of a personality who had impressed him greatly. He wanted to see what was so special about Him. So he was content with positioning himself on a tree under which Jesus would pass. This woman wanted more. She wanted a change in her circumstances – a better health report. She wanted things to turn around for good. She was ready to risk everything for this. She was tired of carrying this disease with her. She wanted healing.

What is it that you have been yearning for so badly that you would stop at nothing to pursue? What ailment is dragging you down, to the extent that it is sapping your strength and energy? What problem or disease is there in your life that you would like to banish from your existence for good? What internal battles have you been waging that you are bound to lose? Why not dump them and make a fresh start with Jesus?

This woman wanted to put an end to a tantalising state of mind. She was unwilling to continue the struggle after she had heard of Jesus and His ability to come to her aid. She had had enough of going round in circles, visiting quacks and being cheated. She had received the good news that Jesus could heal her and she was intent on taking full advantage of the opportunity.

How have you received the good news of what our Lord Jesus could do in your life? What have you done with the ‘good tidings of great joy’ that has sounded in your ears year after year as the salvation of humanity is preached? What is your response to the coming of a promised Messiah, whose mission is to save humanity from sin? (Matthew 1:21) The woman’s response was spontaneous. On hearing the good news she made a move; she directed her steps to the source of her healing.

Many are desirous of an encounter with Jesus but do not know how to proceed. Probably you have been struggling with your level of faith and have observed that the relationship is too mechanical and you need to get out of that rut. Jesus offers His bosom to lay your head on (like John did) so you can feel His heart beat. His heart beats for you. He wants you o be a part of the fold which He shepherds. “Today, if you hear His voice, do not harden your hearts …” (Hebrews 3:7-8) Jesus loves you unconditionally. 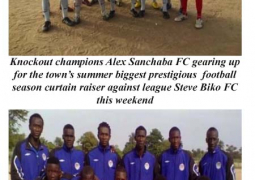