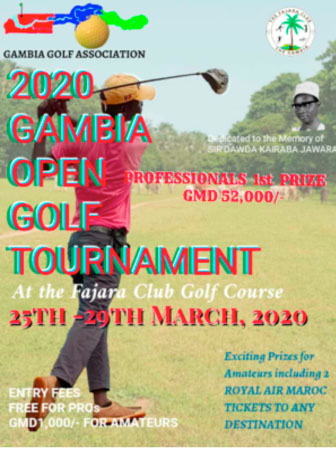 The 2020 Gambia Open golf tournament organised by The Gambia Golf Association (GGA), in partnership with Fajara Club, is set to take place at the Fajara Club Golf Course from 25-29 March 2020.

The Gambia Open is an international event, which is also The Gambia’s national championship event for golf.

This year’s tournament is dedicated to the memory of Sir Dawda Kairaba Jawara, GGA’s first Chief Patron, who died peacefully aged 95 at his home in Fajara, on Tuesday 27 August 2019.

Sir Dawda’s personal contribution and that of his government, to the game of golf in The Gambia is unparalleled. Therefore it is befitting that the first Gambia Open Golf Tournament following his death, be dedicated to his memory.

The winner of the professional category is expected to receive D52,000, amongst other cash prize monies for the 2nd to 7th positions.

Exciting prizes for the amateur categories include two air tickets to any destination, sponsored by Royal Air Maroc.

Since its inception in 2009 as the National Governing Body for Golf in The Gambia, the GGA has regularly held tournaments and has since paid out almost GMD1.2 million in professional prize money.