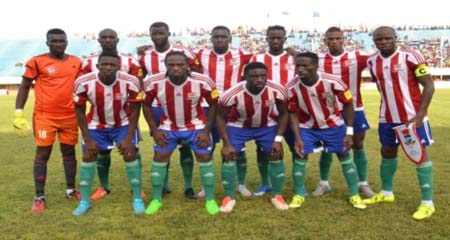 Poor officiating has cost The Gambia a place in the CAF U-20 youth championship.

Benin referee disallowed two Gambian goals in the second leg of the final match of the qualifiers played in Conakry yesterday, Sunday 24 July 2016.

According to live commentary monitored over the Gambia Radio and Television Services (GRTS Radio) by Essa Sowe, the Young Scorpions scored 2 goals that were disallowed in each half by the Benin referee and his assistants.

The Gambia, who were eying to make their third appearance at the tournament, saw their hopes dashed by the referee who was not at the top of his game.

The Gambia, who drew goalless with their Guinean counterparts in the first leg played in Banjul a fortnight ago, were beaten 2-1 in Conakry.

Two goals in each half by Guinea ensured that Ebrima Jobe’s spot-kick only proved to be a consolation for The Gambia.

The Gambia, it must be noted, put up a respectable performance against Guinea despite losing 2-1.

Meanwhile, Nigeria, the World Under-17 champions, failed to reach next year’s Under-20 Africa Cup of Nations in Zambia, falling to a shock 3-4 home defeat to Sudan who sealed a famous qualification.

Nigeria hosted Sudan in Lagos leading 2-1 from the first leg, but Sudan - who had a man sent off - came from behind to level the tie 5-5 overall and progress on away goals.

Senegal qualified on Friday after eliminating Ghana, and South Africa and Egypt also went through.

Nigeria, who have enjoyed much success in youth competitions both in Africa and globally, went into the return leg of their qualifier against Sudan as favourites to win.

Nigeria had already endured a torrid week after the players threatened to boycott the game due to unpaid allowances and poor treatment.

It took the late intervention of Nigeria Football Federation vice president Seyi Akinwunmi to avert the crisis, with him donating $17,000 to the team.

Another country missing from Zambia 2017 will be Ghana who fell to a 3-2 aggregate defeat to Senegal on Friday.

Ghana are the only African team to have won the Under-20 World Cup, lifting the trophy in 2009 with a penalties victory over Brazil in the final in Egypt.

However, Senegal’s 3-1 advantage from the first leg in Dakar proved decisive, with Ghana failing to claw back the deficit.

Ghana gave the home fans some hope when they went 1-0 up, but Senegal’s dogged defence stopped them from adding to the tally, with Senegal becoming the first side to join the hosts Zambia at next year’s finals.

South Africa will also be at the finals after a 3-0 win over Lesotho on Saturday, winning 5-0 on aggregate.

Also on Saturday, Egypt won 4-0 away to Angola to book their place in Zambia. The victory gave Egypt a 5-0 aggregate win.

In total, seven teams will join hosts Zambia at the finals next year.

The top four sides at the African tournament will qualify for the Under-20 World Cup in South Korea in 2017.