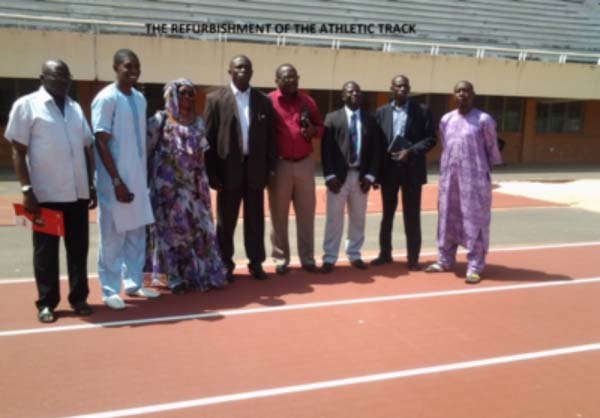 The International Olympic Committee (IOC) Member for Gambia, Beatrice Allen, on Thursday inspected the renovation work on the athletics track at the Independence Stadium in Bakau.

The work is part of the major renovation going on at the country’s main multipurpose sports complex.

Beatrice Allen, who doubles as first vice president of The Gambia National Olympic Committee (GNOC), was very instrumental in getting funds from IOC towards the acquisition of a modern athletics track for The Gambia.

Accompanied by Marcel Mendy, Executive Director of National Sports Council, Pa Suwareh Faye, acting General Manager of the stadium and other staff of the council, Miss Allen, was on an invitation by the President of The Gambia Athletics Association (GAA) Alhagie Dodou Capi Joof, to seek firsthand information about the project.

The  project, jointly financed by the  Government of The Gambia, the IAAF, IAF foundation and the IOC through GNOC, consisted of re-doing  the gutter ways and other major engineering work as well as  the laying of world-class athletics tracts by an IOC-appointed renowned specialized company, MONDO.

After the visit, Beatrice Allen expressed her delight of seeing the country’s only sports complex regaining its normal athletics life after over five (5) years of inability.

She lamented that the National Olympic Committee has been spending huge amount of money in sending Gambian Athletes on overseas training but with the completion of the tracks that money can be used in other areas of sports development.

She advised the stadium management to take preventive measures in preserving the tracks, especially during social events.

.GNOC administrative officer Muhammed Janneh and the deputy permanent secretary for Sports at the Ministry of Youth and Sports Abdoulie Kah were in attendance.