The Chairman of the Board of Directors of Standard Chartered Bank (SCB), Alpha Barry, has said SCB is one of the oldest and leading banks and has a longstanding legacy in Africa.

He said for over 150 years the bank has operated on the continent, and has been a genuine and committed partner in Africa’s development.

Mr Barry made this statement during the launching of the “Here for Africa” Campaign, at a reception held at the Coco Ocean Hotel on Friday 14 October 2016.

“Today, we are celebrating the launching of a campaign which not only celebrates our history and contribution to Africa economic development, but more importantly, our commitment to the continent’s future.”

According to Board chairman Barry, “Here for Africa” is their Pan- African initiative to reiterate to all their customers and partners that they are here to stay, and would continue to participate in building the continent.

Mr Barry further indicated that Standard Chartered Bank is supporting Africa core source of income - its trade corridors with not only financing solutions for individual traders, but also literally helping to build the capacity and infrastructure of ports in The Gambia, Senegal, Nigeria and Mozambia.

In his launching statement, the Chief Executive Officer of Standard Chartered Bank, Albert Saltson, said they are celebrating the client kick-off of a campaign, which not only celebrates their history and contribution to Africa economic development, but more importantly, their commitment to the continent’s future.

He said: “Here for Africa”- the title of the campaign, is no coincidence, and it’s a philosophy and a promise which links directly to the bank’s well entrenched and international brand promise of being ‘Here for good.’”

According to the Bank’s CEO, “Here for Africa” is a visual affirmation and celebration of their heritage, culture and history in Africa, as well as an expression of their confidence in the continent’s future.

“It is a symbolic campaign of our commitment to continue investing in the continent core growth sector to support sustainable development for the long term.”

CEO Saltson further stated that SCB is funding new world discoveries with some of the world’s largest gas reserves found off the coast of Mozambique and East Africa.

“We are providing the catalyst to economic growth through our USD5 billion commitment to power-Africa- a partnership led by President Obama and driven by African governments, private sector companies and governments to bring light and power into homes and businesses across the region.”

In The Gambia, he added, the bank had experienced and overcome significant challenges, which have helped to reinforce their strategy; that they are indeed “Here for Good”.

“Through ‘Here for Africa’ we re-emphasize our appreciation and support of key growth sectors in The Gambia and, by extension, the rest of the African continent.”

CEO Saltson revealed that this year alone, they had reached out to more than 1,500 girls across four schools in the Greater Banjul Area through their goal programmes, which provides girls with life skills through sports.

“These girls will go on to become leaders in our nation, contributing to the growth of Gambian economy and the society as a whole.” 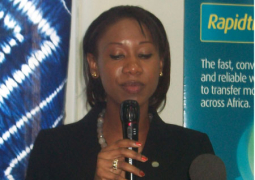