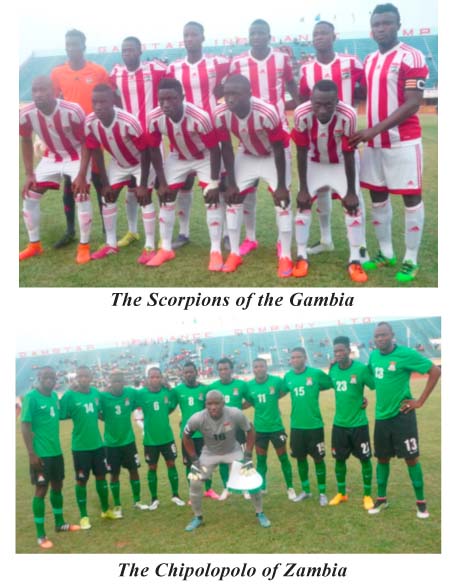 The Gambia senior national team was yesterday Monday 30 May 2016 held to a goalless draw by Zambia in an international friendly game played at the Independence Stadium in Bakau.

The keenly contested encounter was part of a series of technical training programmes set aside for the Scorpions ahead of their Group M AFCON Qualifier match at home to Bafana Bafana of South Africa slated for June 4.

The friendly between The Gambia and Zambia was the first time the two senior national teams have come face off against each other at top level.

The Gambia used a blend of both local and foreign-based players as head coach Sang Ndong continues his rebuilding process of the Scorpions.

Speaking to reporters at a press conference shortly after the encounter, coach Ndong described the game as “very timely and useful”.

As of now, he noted, they are trying to identify faults and not considering results, saying: “Our problem is goal-scoring which is why we went out for Bakary Njie and Baboucarr Trawally for the upcoming game against South Africa.”

Coach Ndong was full of praises for the local-based players, saying they are the ones that need to be encouraged because The Gambia’s football future lies on them.

He stated: “We should invest in them because if we can carry on having test matches with good performances of this nature that can bring people to the stadium. For sure before the next 2 years we will come up with a very good team.”

He said he was pleased with the performance against Zambia, adding that they are proving a point for themselves that they are ready to be given a chance.

He highlighted that “it is good we believe in our local-based players and keep and train them”, saying they have stood up for people to know that “we have got a local based team that can challenge the professionals”.

The Gambia used to play very well in the first half but would concede goals in the second half, he observed, saying they have addressed that problem.

He confirmed that Modou Secka Barrow, Demba Savage, Mustapha Carayol, Hamza Barry and Pa Amat Dibba are all out injured.

He said they have a 2-year project and are currently rebuilding and as such “do not have a permanent team for now”.

He also said every one of his players needs to improve himself as he would not go by records for his selection of players.

In conclusion, he said they would come stronger against South Africa on Saturday.

Zambia’s assistant coach Agrey Chiyangi, in his comments after the match, said the game had been a very good preparation for them as they did not concede.

The game has also given them a clue of how West African teams play in order to better prepare for their game against Guinea Bissau, he said, adding that they would only have to work on their scoring tactics.

Zambia is a household name and missing the Africa Cup of Nations will not be good for them, he remarked, saying this has put a lot of pressure on the coaching staff but they would do their best to handle that situation well.

The delay in their travelling have affected their players as they did not have enough rest, he also said, adding that “playing The Gambia is an eye-opener for us to know what to expect in Guinea Bissau”.