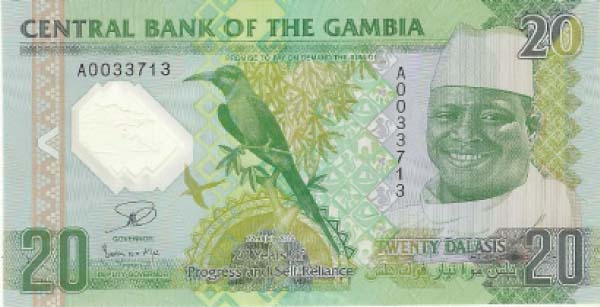 In order to curb the rapid depreciation of the local currency, the Gambia government has passed an immediate directive that “the US dollar cannot be changed for more than 35 to 40 dalasi to a dollar.”

A statement from the Office of the President in Banjul on Monday said the Central Bank of The Gambia will set the rates of the Euro and Pound Sterling “immediately based on their real value”.

One Euro and one Pound Sterling before this press release were selling around D56 and D75 respectively.

Since 2014, the Gambian currency, the dalasi, has continued to steadily lose value against all the major international currencies.The depreciation was partly the result of reduced foreign exchange receipts, coupled with strong demand owing in part to the high level of liquidity in the economy.

In the statement from Banjul, the State House apparently blamed the depreciation of the dalasi on currency hoarding and speculation.

“Anybody found hoarding foreign currency in order to cause the depreciation will be charged and tried under the Economic Crimes Act and the immediate amount hoarded will be confiscated,” the State House said.

It warned that businessmen who are involved in foreign exchange speculation and hoarding should “desist immediately or face very drastic action”.

“Such notorious businessmen will have their businesses closed and if they are foreigners face immediate deportation,” the statement said.

Henceforth, no foreign exchange amounting to more than ten thousand dollars, euros and pound sterling can be taken out of The Gambia without approval from the Office of the President, the State House announced.

“Failure to do so, the money will be forfeited to the state with immediate effect,” the presidency said.

In order to effect the directives, the State House has immediately launched ‘Operation No Compromise’ once again.

Service heads are warned to carry the directives out to the letter “as any security personnel found wanting in the execution of ‘Operation No Compromise’ will regret being born.”

“‘Operation No Compromise’ is here to stay until currency speculators and hoarders and the illegal market are wiped out of the system,” the presidency said.