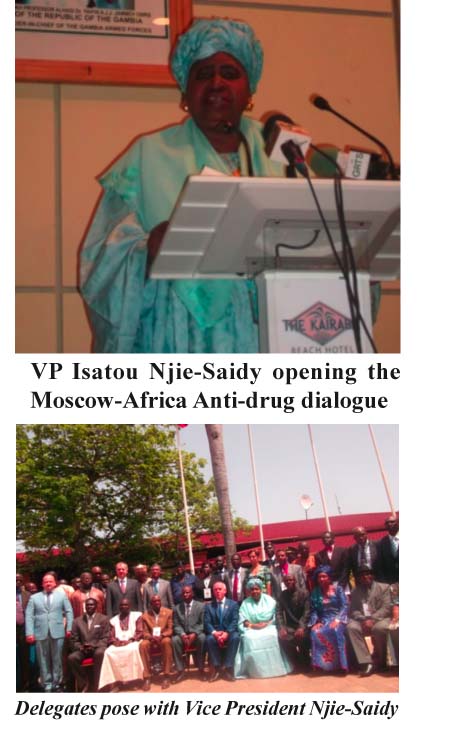 The Gambia yesterday hosted the Moscow-Africa anti-drug dialogue, at the Kairaba Beach Hotel, as part of marking the 21st anniversary of the 22 July Revolution.

Speaking on behalf of the President,the Vice President and Minister of Women’s Affairs, Isatou Njie-Saidy, said revolutions in human history necessarily influence each other, thus it would be untenable to assert that the July 22 Revolution has not been influenced by the success of the Bolshevik Revolution.

She renewed her commendation for Russian support of the African national liberation movements to free their people from colonial rule, as well as Russia’s pragmatism in befriending many African states immediately after independence regardless of the absence of ideological affinity during the Cold War era.

VP Njie-Saidy pointed out that it is through dialogue among nation-states, which results in agreements for sustained joint coordinated action, that the world can rid itself of menaces such as drug trafficking and the use of drugs.

This is because the drug cartels are well-organized and coordinated, and have no moral restraint in the pursuit of their ignoble objectives, the Vice President said, adding that the illicit wealth drug cartels have gathered has given them the potential to destabilize political systems in many parts of the world.

“Governments, anti-drug institutions and agencies of African states should work together to ensure that these economic, political and social drawbacks of the drug trade are prevented and contained.”

Talking about The Gambia, she added that the Gambia government “will never compromise its policy” of zero tolerance to drugs.

“In accordance with our means, we have created, staffed and provided for an anti-narcotics agency, and the enabling environment for it to effectively and professionally execute its mandate, with a view to making The Gambia a drug-free state.

“The Gambia government will remain committed to anti-drug control in full support of the objective of the dialogue,” she added.

Interior Minister Ousman Sonko, in his remarks on the occasion, said The Gambia being part of the international community is taking bold steps in the fight against the drug menace, and other associated crimes.

Minister Sonko said the aim of the criminal justice system is not only to punish offenders, but to deter others, reform and rehabilitate offenders for them to be better persons in society, as well as to educate others on the effects and consequences of committing an offence.

The Director of the Federal Control Service of the Russian Federation, Viktor Ivanov, in his statement delivered at the conference, said the results of their work have made it significant to formulate and adopt a declaration on goals and principles of the global anti-drug policy, in order to present a consolidated position at the forthcoming UN General Assembly special session next April 2016.

The world drastically comprehends that drugs are not merely a tragic factor causing hundreds of thousands of human deaths every year, but a growing global threat and one of the main international problems of the time, he added.