The continues to maintain its significant record in the monthly FIFA rankings. In the latest ranking for April 2009, the country gained 26 points and are now 69 in the World and 16 in , two spots behind neighbors .

After recording a total of 491 points, The Gambia moved four places up from 73 in the world to 69.

The is now two points behind who are now 13 in and 66 in the world.

Reacting to the ranking, Senior National Team Coach Paul Put, stated that 's position in the ranking is very important.

He said, "looking at where the country came from on the table and where we are today, is a long way and it is as a result of good work within a short period of time. This is a great achievement and we need to maintain this momentum."

"It is important to have friendly games and will be working together with the FA for future friend lies. I am working on one in June in . I am also planning for another one in August. We can either play in or any European country", he pointed out.

Senior national team coach, Put, is also preparing a local based team for Zone II championship slated for November in .

and , the top two African sides in Fifa's rankings, have dropped slightly in the latest tables.

Both have suffered from indifferent starts to the final phase of 2010 World Cup qualifying.

But third-placed has climbed slightly and and have shot up the global tables.

is now 19 in the Fifa global tables, having dropped three places overall.

is down six places to 30, but remains 's second-placed team.

hover one place behind the Super Eagles, having gone up three spots to 31 overall with a narrow win in their most recent qualifying match.

The big winners of this recent round of games are and .

benefits from its thrilling victory over to shoot up 26 places in the Fifa tables. 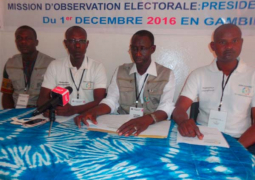 ‘Gambia has started ball rolling for Africa to learn from’