The United Nations International Children Fund (UNICEF) - Gambia office, an organ of the United Nations charged with the responsibility of promoting and protecting the welfare of children globally, Friday held a media briefing ahead of the mega launching of the UNICEF flagship report.

The UNICEF report on the state of the world children, released annually, catalogues achievements and challenges in UNICEF’s work with partners around the world to leverage substantial results for children and young people on the aspects of rights and equity, survival, development, and participants.

To be launched on 2 June 2011 at the Kairaba Beach Hotel, the 2011 report, on the theme: Adolescent: an age of opportunity, examines the social and economic status of adolescents.

Among other aspects, it underscores the need to harness the potential, energy and skills of young people, as well as invest greatly in them to break entrenched cycles of poverty and inequity, and accelerate progress and developments.

"In terms of education, nearly 70 million adolescents are out of school, and by region most affected by this is Sub-Saharan Africa, where 38% of adolescents do not attend school," UNICEF Banjul office communication specialist Sally Sadie Singhateh told journalists on Friday at a news conference held at the Independence Stadium.

According to Ms Singhateh, the theme for this year’s launching of the UNICEF Report was identified for two reasons. "The first one is in support of the second international year of youths which began in August 2010. The other one is to create opportunities for adolescents at this stage in their lives by calling for stronger national policies, as well as targeting them with specific programmes that provide them access to quality education and health care," she said.

She noted that since 1993, there has been 33% reduction in under-five mortality in most regions around the world, as many girls as boys go to primary school and millions of children now benefit from improved access to primary education, safe water, and critical medicines such as routine vaccinations.

Madam Singhateh however explained that much of these achievements are not sustained because investments tend to dwindle as the children grow and develop into adolescents.

The disadvantages of poverty, social status, gender or disability often contribute to these poor social and economic conditions of millions of adolescents, she added, saying the report states that it is only through investment that "we can sustain the global achievements we have made in the past decade".

She revealed that in 2009, 81 million young people globally were out of work, mainly due to the absence of productive full-time employment and that climate change is also fast becoming an issue of concern for this age group.

"For instance, in natural disasters, a young child may likely die from disaster or from a disease, but a young person will suffer as a result of food shortages, inadequate water and sanitation systems, interrupted education, and family separation or displacement," she said.

In The Gambia, she went on, UNICEF, among other interventions, work closely with the Gambia government to ensure that good citizenship is instilled into young people, as well as encourage the youth to be actively involved in issues of governance.

For his part, Marcel Mendy, executive secretary of the National Youth Council, underscored the importance of the report towards the development of adolescents and in particular the youth.

Mr Mendy noted that it will vigorously address problems facing young people as well as the type of mechanism to put in place that will address their concerns.

"A wide range of issues is affecting young people and the launching of the report will go a long way in guiding policymakers in making policies that will fit the needs and demands of young people," he said, adding: "Focusing the report on adolescents is crucial as they are among those vulnerable."

Meanwhile, UNICEF will also host an intergenerational dialogue at the Friendship Hostel in Bakau before the launching of the report.

2010 a successful year for The Gambia – President Jammeh 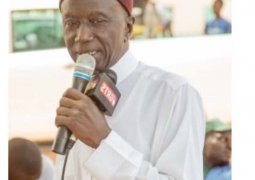