Real Gross Domestic Product (GDP) of the Gambian economy is estimated to have grown by 4.0 percent in 2012 following a contraction of 4.3 percent in 2011, a press release from the Monetary Policy Committee of the Central Bank of The Gambia has said.

The release, issued Monday at a press conference held at the Central Bank in Banjul, said preliminary projections indicate that output would expand by 10.0 percent in 2013 premised on strong growth of agriculture and tourism.

The Monetary Policy Committee however said that the Dalasi weakened against all major international currencies traded in the foreign exchange market.

“Year-on-year to end-December 2012, the Dalasi depreciated against the US Dollar by 11.6 percent, Pound Sterling by 18.0 percent and Euro by 11.5 percent,” the CBG stated.

According to the Committee, preliminary estimates of government fiscal operations in 2012 showed a lower deficit (including grants) of 4.4 percent of GDP compared to 4.6 percent of GDP in 2011.

The pace of monetary expansion, the CBG added, moderated in line with expectations, while monetary supply grew by 7.8 percent in 2012 compared to 11.0 percent in 2011 and the target of 8.5 percent.

The Committee further indicated that in order to ensure effective transmission of monetary policy, it is essential to continue strengthening the resilience of banks.

Bank soundness, it went on, is also critical to protect depositors and other creditors, as well as ensuring an appropriate provision of credit to the economy.

“The banking industry remains fundamentally sound. The industry’s capital and reserves increased to D3.06 billion in December 2012 compared to D2.63 billion in 2011 mainly an account of capital injection totaling D392.4 million,” it said.

The Central Bank Monetary Policy Committee also revealed that the average risk-weighted capital adequacy ratio also increased to 33.0 percent compared to 25.1 percent in 2011 and the minimum requirement of 10 percent.

The Monetary Policy Committee further stated that inflation is forecast to remain in single digit consistent with the pace of monetary expansion.

“The MPC, however, assesses the balance of risks to the inflation outlook to be on the upside given heightened inflationary expectations,” it added.

In light of these developments, the MPC is of the view that the current monetary policy stance is appropriate and has therefore decided to leave the Rediscount rate, the Bank’s policy rate, unchanged at 12.0 percent.

However, the Committee said it would continue to monitor price developments and to take action consistent with its mandate to keep inflation low and non-volatile. 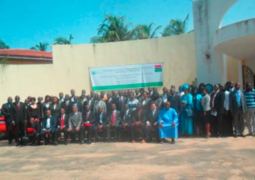